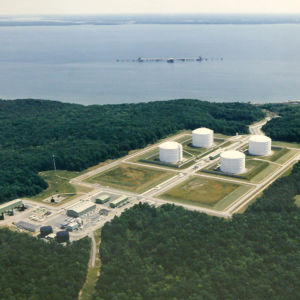 Since the inauguration of President Donald Trump, more and more environmental policies are being enacted at the state and local, rather than federal level. This trend continued this week, when the Baltimore City Council passed a change to zoning regulations aimed at preventing energy companies from using the Port of Baltimore to ship oil. In a Monday night meeting, the Baltimore City Council voted to change the city’s zoning laws to prohibit the construction or expansion of crude oil terminals within city limits. The change adds crude oil terminals to a list of property uses banned in all areas of the city, including incinerators, junk yards, and landfills.

“This protects our community, I believe, from becoming a center for this kind of crude oil commerce. Although we can’t control crude oil shipment by rail, this is another way to say, ‘Hey, why don’t you like…go someplace else,” said Councilmember Mary Pat Clarke, who specifically thanked activists for their work on the issue.

The change passed the city council with a single nay vote and no debate. Although Baltimore Mayor Catherine Pugh has not yet indicated if she will sign the bill or not, environmental groups are already pressuring her office to support the legislation.

The Baltimore City Council vote shows that the sort of progressive local climate policies that began on the West Coast are being adopted in the East as well. According to ThinkProgress, the oil export terminal ban was more than just a strike against shipping fossil fuels overseas–it was also an indirect strike against oil trains running through the city.

Because railroads are regulated by the federal government and common carrier laws, municipalities have little ability to enforce limitations on what trains can carry within their jurisdictions.

Prohibiting terminal construction and expansion is a step on the path to forcing the existing terminals to close. The Port of Baltimore is also home to a significant coal export facility, though this is not specifically targeted under the current legislation.

Baltimore’s decision follows a ban passed in Portland, Ore. in 2016. In order to block fossil fuel terminals in the city, Portland’s City Council created a new prohibited land use category specifically for these terminals. After outcry from industry groups, who argued that the ban violated the Interstate Commerce Clause, the Oregon Land Use Board of Appeals ruled the ban unconstitutional. However, a decision by the Oregon Court of Appeals in January breathed new life into the ban, finding that it did not violate the Constitution.

From the beginning, Portland’s city government viewed the legislation as a groundbreaking policy that would serve as a model for other cities. Democrat Charlie Hales, then Portland’s mayor, called it “the first stone in a green wall of resistance against fossil fuel facilities on the West Coast.”

In Baltimore, activists who pushed for the terminal ban specifically cited Portland’s decisions as a necessary first step. Many of them see a ban on crude oil as a step towards banning all fossil fuels, including natural gas and coal.

“I don’t know that we would have pushed through this zoning code strategy if not for what was happening on the West Coast,” said Jennifer Kunze, a Maryland state organizer with Clean Water Action, an area environmental group. “It has been really inspiring to see the progress that Portland and Vancouver and Whatcom [county] have made on taking local leadership on this issue.”

Banning the construction of fossil fuel terminals in Baltimore City limits will likely mean that the city misses out on a significant amount of infrastructure spending and jobs. Dominion Energy recently spent around $4 billion to install an LNG export terminal in Cove Point, MD, south of Baltimore along the Chesapeake. Cove Point is the second LNG export terminal to be constructed in the Lower 48, following a Louisiana terminal that began exports in 2016.

The project created thousands of skilled construction jobs during its construction and will support around 75 full time positions when in full operation. Overall, the terminal is projected to generate an additional $40 million in tax revenue for the local county. While the Port of Baltimore remains a major export location for U.S. coal, so far it is missing out on the growth of natural gas, particularly as the oil export ban has been gathering support in city government over the last few years.

With the U.S. poised to become the world’s third-largest LNG exporter in 2018, ports capable of handling energy shipments stand to gain in both revenue and jobs. When fully operational, the Cove Point facility should be able to liquefy about 0.75 bcfd of gas. This is nearly one tenth the projected exports for 2020.