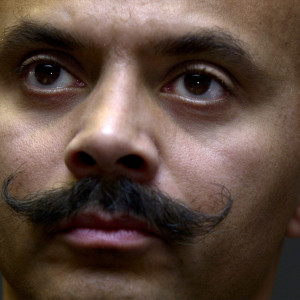 Peter Kirsanow is the longest-serving member of the U.S. Commission on Civil Rights. The conservative Republican was appointed by President George W. Bush in 2001. (AP Photo/Kenneth Lambert)
News

Conservative Supreme Court Justice Antonin Scalia stirred up controversy Wednesday by asking whether black students may benefit from attending “less-advanced” or “slower-track” colleges where they “do not feel that they’re being pushed ahead in classes that are too fast for them.”

His comments, made during oral arguments for a high-profile affirmative action case, alluded to what the Washington Post called a “widely disputed” theory about the effects of race-conscious admissions policies. It’s known as “mismatch,” and it holds that affirmative action harms minority students by putting them in schools that are too challenging.

RELATED: Will Affirmative Action Take a Hit at the Supreme Court?

A few news outlets pointed out that Scalia may have been making a direct reference to a brief filed in the case by two conservative members of the U.S. Commission on Civil Rights, Gail Heriot and Peter Kirsanow, both of whom are major “mismatch” theory proponents. Yet this media coverage neglected the illuminating appearance the two commissioners made Monday at the Heritage Foundation — one where they fleshed out their views on affirmative action and delivered their own provocative remarks about race on campus.

Heriot, a University of San Diego law professor, blamed race-conscious policies for producing “unmarketable communications majors,” “underwater basket-weaving majors” and “grievance studies majors.” She said many students start out studying science, technology, engineering or math, but switch to easier disciplines after finding their course work too challenging. The professor argued this would happen less often if the students in question were at slightly less competitive schools.

Kirsanow, who is black, delivered an even more dramatic denunciation of the academic status quo. He joked that community colleges probably provide better education than the Ivy League schools where he sent his own children. He also rejected the idea that promoting diverse student bodies represents a compelling government interest.

“Having some Hispanic kid sit next to an Asian kid in a pottery class probably doesn’t elevate to that standard,” he said.

In response to question from the audience, Kirsanow mocked the activism of Black Lives Matter student groups, which claim that minorities on campus still face institutional racism. “They are these precious little flowers that believe they’ve been discriminated against, 50 years after the passage of the 1964 Civil Rights Act,” he said.

“I keep hearing about white privilege,” he added moments later. “The most privileged students in schools in 2015 America are Hispanic and black students by far.”

“Racial isolation is a real thing. It’s something that students, including our clients, experience,” he said. “I wouldn’t take such a scornful position about students on campus or the presence of racism in some corners.”

Schnapper-Casteras called Scalia’s questioning unfortunate and misguided, stressing that the mismatch theory has been thoroughly debunked by the vast majority of social scientists.