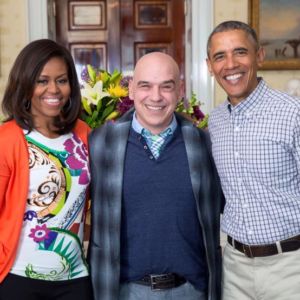 The James Beard Award winner said Thursday there’s “not a chance” he’ll let the presumptive GOP presidential nominee into his restaurants when the Republican National Convention comes to town this month.

But Symon, who told Cleveland’s 92.3 The Fan that Trump “creeps him out,” apparently isn’t creeped out by providing a venue for the all-Republican Senate and Congressional Western Caucuses to have a political reception during Trump’s convention.

The Western Caucus Foundation will host “Red, White and Western” for lawmakers, their staff and invited guests on July 20 at Symon’s Mabel’s BBQ, less than two blocks from the GOP proceedings at Quicken Loans Arena.

Since food and drink are advertised on the invitation, the Republicans will presumably sample Symon’s unique style, “incorporating Bertman’s ballpark mustard into the barbecue sauce” and “using Eastern European spices and smoking meat over local fruitwood.”

InsideSources emailed Symon’s press contact to ask about the reception — and whether Trump truly would be barred from the premises if he happened to show up. As of early Friday afternoon, there was no response. A message for the Western Caucus Foundation was also not returned.