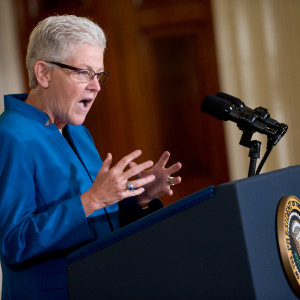 During March 22 hearings before the House Energy and Commerce Committee, under questioning by West Virginia Rep. David McKinley (R), EPA Administrator Gina McCarthy admitted (once again) the Obama administration’s climate efforts will do nothing to protect public or environmental health. McCarthy instead acknowledged the efforts are merely a symbolic attempt to get other countries’ leaders to join the Paris climate agreement.

Concerning the Clean Power Plan (CPP), McKinley asked, “If it doesn’t have an impact on climate change around the world, why are we subjecting our hardworking taxpayers and men and women in the coal fields to something that has no benefit?”

“We see it as having had enormous benefit in showing sort of domestic leadership, as well as garnering support around the country for the agreement we reached in Paris,” McCarthy responded.

There is nothing new in McCarthy’s admission. In September 2013, in response to questions from Rep. Mike Pompeo (R-KS) concerning CPP, which was then under development, McCarthy said she couldn’t show it would have any impact on the 26 “climate indicators” being tracked by the Environmental Protection Agency. McCarthy said, “[The CPP was] part of an overall strategy … positioning the U.S. for leadership in an international discussion.”

In July 2015, McCarthy testified before the House Science Committee, where she said, “The value of [the CPP] is not measured [by the amount of warming it prevents]. … I’m not disagreeing that this action in and of itself will not make all the difference we need to address climate action, but what I’m saying is that if we don’t take action domestically we will never get started.”

The domestic costs of climate symbolism are high. Regulations imposed by the Obama administration have already shuttered 265 coal-fired power units between 2009 and 2014, which took enough power offline to electrify 12.6 million homes. These closures cost 39,684 jobs at coal-fired electric power plants and thousands of other jobs at coal mines; at companies who provide services or machinery to the coal-mining, transportation, or power-generation industries; and at retailers and restaurants where the newly unemployed used to shop and dine. The North American Electric Reliability Corporation warns CPP will likely result in the closure of nearly five times more coal-fired power plants, which means hundreds of thousands of additional jobs could be lost.

Consumers will also be directly harmed by CPP. A study produced by NERA Economic Consulting shows CPP could raise electricity by double digits, with ratepayers in the 28 states hardest hit by CPP possibly facing price spikes greater than 20 percent.

Poor and many middle-income families, which include many minorities and those on fixed incomes, spend a higher percentage of their money on energy and commodities that are heavily dependent upon energy consumption, such as food and transportation, compared to relatively wealthy families. This means CPP and other similar policies are essentially a tax on the poor.

To some extent, the Obama administration’s symbolic climate policies have worked. They helped convince 184 nations to agree to cut or cap their emissions at the Paris climate conference in December 2015, but even these commitments are only symbolic. The United Nations has acknowledged even if all the Paris-agreement nations keep their commitments, the impact on global temperature will be minimal—around one or two-tenths of a degree Celsius, virtually too small to measure.

The costs imposed by the Paris agreement would be the most detrimental for the poorest among us. The carbon dioxide reductions agreed to in Paris would virtually guarantee continued poverty and unnecessary premature death for the most impoverished 1.5 billion people in the world.

Think about how many lives would be saved by increased fossil-fuel use in the health care industry alone. Modern hospitals cannot function without fossil fuels. Gasoline fuels emergency vehicles and electricity keeps the lights, computers, climate controls, and refrigeration working properly. Fossil-fuel-powered electricity runs incubators that save the lives of premature babies, and respirators keep people breathing until they can breathe on their own. Electricity runs the machines sterilizing instruments, and MRIs, x-rays, CT scans and virtually all of the other tests and technologies enabling medical professionals to predict, diagnose, and treat the many diseases and injuries humans suffer each year need significant amounts of electric power.

Electricity also delivers safe drinking water, and fossil fuels are used to make the plastics that are used in hospital blood and medicine bags, tubes, wiring, and even furniture.

How long should the poor in developing countries be required to forego the fossil-fuel dependent, lifesaving medical technologies we in the modernized Western world take for granted? Symbolic climate policies carry an unjustifiable price tag, killing people and leaving millions of families without energy and unable to raise themselves out of poverty. Nothing could be more immoral.