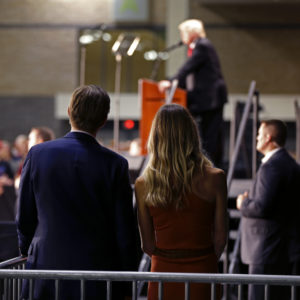 Clinton and Trump, the Scripted and the Spontaneous

If you want to rise the heights in politics, get in front of a mirror and start reading aloud from a newspaper, a novel, anything. The proof of this lies before us in the presidential election.

Donald Trump is a natural orator. Brilliant. But when it comes to reading from a teleprompter, he is much less so. The act of reading aloud reduces him, robs him of his ebullience and his tremendous talent at playing an audience.

Hillary Clinton, with or without a teleprompter, is not a great speaker, but she reads her speeches well. Her problem may be in the content of the speeches; they seem, like so much of the Clinton campaign, to be touched by too many hands, massaged by committee.

But she has skill at the teleprompter, seldom looking at the speech in front of her, but looking up to the judiciously placed screens that carry the words that she is reading, looking as though she is saying them, not often going off script.

I believe the ability to sightread may be something we are born with. Most broadcasters have it, but not all. I marvel at the ability of my friend and colleague Tim Farley, host of “The Morning Briefing” on SiriusXM Radio, to read anything faultlessly, even if he has never seen it before.

By contrast the late Tim Russert, a master questioner, often stumbled when reading. I myself am such a stumblebum that I do without a teleprompter, which has its own liabilities.

When Winston Churchill — the man who was to become the greatest orator of the 20th century — gave his first speech in the House of Commons as a 29-year-old, he blew it. He had planned to speak extemporaneously and he froze for three minutes. From that time on, Churchill wrote out his speeches, memorized them and delivered them as though extemporaneously. During World War II, he kept his dental technician handy so that a prosthetic he wore could be adjusted to maintain that distinctive lisp.

George W. Bush was a disaster when trying to speak off the cuff, failing and falling back on platitudes and cliches, but reading effortlessly. Also his speeches were well-written and not bolted together.

I watched Bush stumble through an impromptu session outside the German Parliament, the Bundestag, in May 2002. The German chancellor, Gerhard Schroeder, showed off his ability to think on his feet. But inside, Bush carried the day by reading a good speech superbly. I was watching Secretary of State Colin Powell sitting a few feet from me, and he visibly relaxed as Bush found his stride.
Martin Luther King wrote out his great speeches and seemed to have at least half-memorized them, so that when he said, “I have a dream,” it came not from his notes but his heart.

Much as we love to hear speakers who can enthrall without notes, in high-stakes politics, delivery and content need to be written down, so that, if for no other reason, they are accurately reported in the high-speed news cycle.

Trump needs to work on his reading-aloud skills, to get comfortable with the teleprompter. If he should win, he will not, one hopes, wing it when war and peace are in the balance.

Clinton needs fewer props, like the teleprompter. She needs to peak out of the shell of committee-written jargon so the voters can get the measure of her. Press conferences would be a good start. At a press conference, we learn how fast the candidate is on his or her feet, what the blindsides are, and the candidate learns firsthand, perhaps for the first time, what people are asking.

It is a two-way affair, ideas coming and going. That is the test of the unscripted response: the American equivalent of Britain’s revered “Question Time.”

You do not get that on the Sunday-morning talk shows: they lack the spontaneity of a forest of hands with many correspondents vying to ask a question. That is democracy raw.