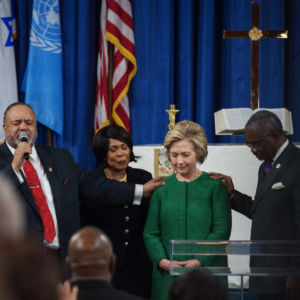 Here’s an unspoken yet transparent truth about this election: Donald Trump could be the least religious presidential nominee in history.

Sure, the Republican makes obligatory promises to the religious right and ham-handed attempts at religiosity, but none of these gestures are remotely convincing from a candidate who clearly sees scripture as a foreign language. Trump says his favorite Bible verse is “an eye for an eye,” and that he doesn’t need forgiveness for anything. He says his own “Art of the Deal” is second only to the holy text in the pantheon of great books. And when he calls Second Corinthians “2 Corinthians,” he frankly sounds like he’s turned the eighth book of the New Testament into the second installment of a lackluster street-racing film franchise.

This, combined with the fact that Trump is hardly a model of Christian charity in the how he treats people, is creating an opportunity for Democrats in November: the chance to win over religious voters who might otherwise be out of reach.

As Religion News Service reported, recent Pew Research polling shows Clinton doing better against Trump with registered voters who attend religious services at least weekly than President Barack Obama did against Republican Mitt Romney at this point in 2012. She’s still losing with this group, but the “God gap” is narrowing. Meanwhile, with “the key Catholic swing voter, Clinton actually leads Trump by a whopping 19-point margin among weekly Mass-goers, whereas Romney led Obama by 3 points among that same group — a 22-point shift.”

As FiveThirtyEight points out, this is more about Trump driving Catholics away than Clinton attracting them.

Not that she isn’t trying. Her selection of Virginia Sen. Tim Kaine as a running mate is seen as, among other things, a conscious play for Catholics, and Kaine put his faith front and center in his speech accepting the vice presidential nomination Wednesday. Through Jesuit education, he said religion “became something vital — my north star for orienting my life.” Then Kaine talked about volunteering with missionaries in Honduras, teaching children welding and carpentry.

“I think the Tim Kaine pick was perfect,” Catholic University professor Jay Richards told InsideSources. “If I were a Hillary Clinton adviser and someone had asked me, I would have said to pick Tim Kaine.”

Richards said the senator was “the best possible choice,” because he can help Clinton appeal to the same socially moderate, economically liberal Catholics opposed to Trump.

Kaine’s record does bring some awkwardness, as the “personally pro-life” candidate used to have more conservative politics on abortion, but he’s now supported strongly be abortion rights groups. Plus, Catholics have historically shown willingness to vote for pro-choice presidential candidates notwithstanding their disagreement on such a serious issue.

Kaine also doesn’t have to make the faith-based argument alone. Clinton is actively putting her Methodist beliefs forward, as has been evident all week at the Democratic National Convention. Top campaign aides raised the issue on cable news. A video of Clinton with racial justice activists showed her asking a pastor for a prayer. And when Bill Clinton took the stage Tuesday to make the case for his wife, he said, “Hillary got her introduction to social justice through her Methodist youth minister, Don Jones. He took her downtown to Chicago to hear Dr. Martin Luther King speak and he remained her friend for the rest of his life.”

For a woman deemed dishonest and untrustworthy by nearly 70 percent of voters, Richards said the faith angle brings some authenticity. “I’m deeply skeptical of a lot of stuff Hillary Clinton says, but I think she’s sincerely a Methodist,” he said.

The past week has shown the danger of using God as a wedge issue, with outrage over a leaked Democratic National Committee emails from this year’s primary that suggested using religion as a cudgel against Bernie Sanders. But in a country that’s still overwhelmingly faithful, it’s also true that this can be a powerful tool to connect with voters. That’s why, even as Democrats run a presidential candidate they say is the most qualified ever to seek the White House, Kaine made a point to stress this about Clinton: “She is ready because of her faith.”