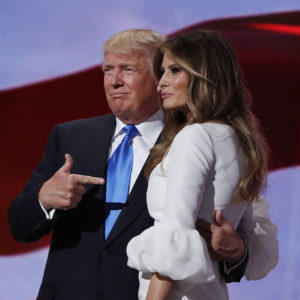 After Al Gore won the popular vote by half a million souls in the presidential election of 2000 but narrowly lost the electoral vote to George W. Bush, Democrats called for abolishment of that anachronism called the Electoral College.

“I believe strongly that in a democracy, we should respect the will of the people and to me that means it’s time to do away with the Electoral College and move to the popular election of our president,” Hillary Clinton said days after the disputed 2000 contest as she celebrated her own election to the Senate from New York.

Yet today, Clinton and fellow Democrats are learning to love the Electoral College.

Even as national polls portray a narrowing race between Clinton and Donald Trump, and Republicans convene in Cleveland to anoint a nominee who swept their primary contests, a state-by-state tally of party strength in Electoral College powerhouses and potential edges in pivotal swing states portray a daunting advantage for Clinton coming out of the parties’ summer conventions.

The Democrats entered the contest with a formidable structural advantage in the Electoral College calculus. Eighteen states and the District of Columbia have voted Democratic in six of the last presidential elections — consistently since 1992. This includes major states with huge troves of electoral votes, such as California, New York, Pennsylvania and Illinois. Among them all, they hold 242 electoral votes.

If Clinton is able to hold these reliably Democratic states, the former secretary of state, senator and first lady could claim the 270 electoral votes needed to win the White House by winning just one big swing state: Florida, with its 29 votes.

“These things do change, but right now, looking at November, I sure would rather be Clinton than be Trump,” says Dennis Goldford, professor of political scientist at Drake University in Des Moines, Iowa — one of the states that may be in play for either candidate. “The advantage, going away this fall, is for Clinton.”

The Republicans, on the other hand, have prevailed in 13 states since 1992. But with the exception of Texas, the reliably Republican strongholds are mainly less populous states. Among them, they hold just 102 electoral votes.

Trump’s electoral path to the White House depends upon wresting big states from the Democrats — targeting white, working-class voters in places such as Michigan and Pennsylvania — holding potentially Democratic-voting states such as North Carolina and Colorado, and winning a big swing state of his own: Ohio.

“It’s not locked in at all,” Herb Asher, professor of political science at Ohio State University, says of swing states such as his — Ohio has voted the way the nation has since the 1960s. “It’s not as if these states are all like California and New York on the Democratic side or Mississippi on the Republican side. Turnout becomes part of the game, and the strength of the candidate becomes part of the game.”

Among the great battlegrounds which could swiftly seal Clinton’s election or provide some of the paving stones for Trump’s more elusive path to the presidency, there is Ohio, which has been a required prize for every Republican elected to the White House. There’s Florida, which voted for Bush twice and President Barack Obama twice. There’s Virginia, which backed Obama twice after siding with the GOP for decades. There’s North Carolina, which went for Obama once.

Clinton holds, on average, less than a two-point edge over Trump in the state where Republicans have convened their convention. They were tied in two Ohio polls— Quinnipiac University’s and Marist College’s for NBC News and the Wall Street Journal. The key, Asher says, will be how many white working-class voters Trump can pull from the Democrats in southeastern Ohio, and how many Republican suburban women Clinton can claim around the state.

Early polling shows a statistical dead-heat in Florida, Clinton leading within one percentage point on average. She holds a more comfortable early edge of five points in Virginia, and a tighter advantage of two points in North Carolina.

Clinton and an allied super-PAC have started airing a well-financed run of TV ads in Ohio, Florida and several other swing states. Together, they paint an image of Trump as a threat to women. One of the more powerful ads playing in Ohio, Asher says, is Clinton’s own long commercial presenting Trump as erratic and ill-tempered as children view him on a TV screen — “Our children are watching”

Before Trump has aired any ads of his own — relying mainly on the 10 million followers of his Twitter account and continuous cable news coverage of his every move — the Priorities USA Action super-PAC forged by Obama’s advisers has drawn nearly $100 million for a campaign that started with anti-Trump ads in Ohio, Florida, Virginia and Nevada.

“A lot of these states wind up with it being within two- or three- or four-point margins,” says Ohio’s Asher. “It’s the Midwest states, the Great Lakes states or ‘Big 10’ states that are going to be the battleground.”

The structural advantage Clinton’s party holds in the Electoral College is reminiscent of one the Republicans held in the 1980s, when California was still counted in the GOP’s column and Florida was voting Republican, says Peter Brown, assistant director of the Quinnipiac Polling Institute. Yet, he says, it’s not insurmountable.

“Everyone who talks about the Electoral College and ‘the big blue wall’ takes for granted that there is no demographic shift that allows for a change in the situation,” Brown says. “The Electoral College would look really red if you flipped the Midwest… You move the national numbers four points so that you are essentially in a dead heat nationally, you get into a situation where that blue wall could come tumbling down.’’

“If Trump can keep Florida and wins Ohio and Pennsylvania, he can win,” Brown says. “If he does those things, he’ll also carry North Carolina.”

These are all states where the average of recent surveys taken portrays the contest within the margins of error — states that will be seeing much more paid political advertising than most Americans will this year. Priorities USA Action plans to spend $11 million on ads in North Carolina, the Charlotte Observer has reported.

“Trump and his folks are looking at Pennsylvania, Michigan and Wisconsin — Wisconsin may be more of a stretch,” Drake’s Goldford says. “But let me put it this way, we’ve got four months to the election, and three months prior to the election in 2000 I sat and listened to a panel of political scientists and the entire question was, ‘How much would Gore win by?’”

“I don’t play the ponies, but I know people who do, and they would say you can read the Racing Form all day, but there is a reason they actually run the race,” he says. Trump’s path, he says, is “very narrow, but that doesn’t mean it’s not there.”