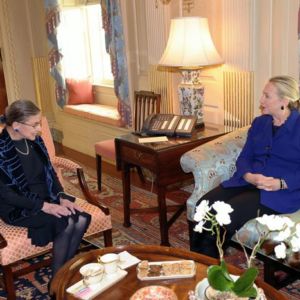 Clinton Set to Get What She Wants From Supreme Court

It isn’t unusual for presidential candidates to discuss the actions of the Supreme Court on the campaign trail — hailing some precedents and promising to overturn others. However, in most election years, the campaign rhetoric is just that: empty rhetoric.

By design, the Constitution limits how far any one president can go in circumventing, overruling or limiting the Supreme Court or the Constitution itself. In 2016, however, the stars have aligned for Secretary Hillary Clinton so that campaign pledges regarding constitutional law are not just empty promises. Indeed, in 2016, such promises are deliverable.

What makes this possible in 2016 is not only the fact that Clinton would be able to appoint a Supreme Court justice of her own choosing but that she already has at least one justice in seeming total support of her constitutional agenda.

On crucial questions concerning both the First and Second amendments, Justice Ruth Bader Ginsburg has declared positions that mirror those of Clinton. These facts combined create the possibility for a scenario that has not occurred in a long time: A president able to weld the appointment power with reasonable certainty that the court will support their agenda. The prospect of that happening today is of particular concern to the future of civil rights.

On questions arising from the First Amendment, the current split on the court has left several questions unresolved and recent precedents in danger of being overturned.

Hillary Clinton has pledged to introduce a constitutional amendment that would effectively alter the First Amendment by overturning the court’s recent precedent in Citizens United. However, if she achieves the presidency, she may not have to take such a drastic step. Justice Ginsburg, for her part, has taken a position similar to Clinton’s by publicly calling for the Supreme Court to overrule the Citizens United precedent.

The stance taken by both Clinton and Ginsburg is illustrative of a larger recent trend on the part of some liberals to see the First Amendment through a partisan lens. For instance, after Justice Antonin Scalia’s passing in the middle of the term, the Supreme Court split 4-4 on several cases. Arguably the most significant of these was Friedrichs v. California Teachers Association. In Friedrichs, nine California teachers argued that compulsory union dues violated their First Amendment rights to free speech and free association.

The court’s liberal members — especially Ginsburg — have voted to silence a non-profit’s critical video of Hillary Clinton through restrictions on campaign limits, to force nuns to fund sexual activity they disagree with, and to force workers to fund political organizations of which they are not members.

A second area in which the law is open to real change is the court’s Second Amendment jurisprudence. The late Justice Scalia wrote the majority opinion in District of Columbia v. Heller, in which the court struck down regulations that made it effectively impossible to obtain a handgun license and thereby upheld the right of citizens to possess weapons for self-defense in their own home.

Once again, Clinton is on record arguing that the case should be overturned. And once again, Ginsburg is also on record in agreement. In an interview with the New York Times, the justice explained she thought Heller was “a very bad decision” and that the court would have an opportunity to reconsider it in the future.

Many of these and similar First and Second Amendment questions will be before the court again in the near future. The court’s tie in Friedrichs has left the issue of worker freedom unresolved and ripe for a new challenge. As recently as this term, the Supreme Court relied on Heller to question the constitutionality of state bans on stun guns, and the right to use non-lethal means of self-defense will likely be before the court again soon.

Considering that the elder justice of the court’s liberal bloc has publicly expressed views in line with those of Clinton, we can be reasonably certain how the court will resolve these questions if they get their way. Regardless of political affiliations, those who care about civil rights — particularly our First and Second amendments — should be concerned about the prospect of a Supreme Court that is not adversarial to the executive.

Brian Miller is an attorney for the Center for Individual Rights (www.cir-usa.org).