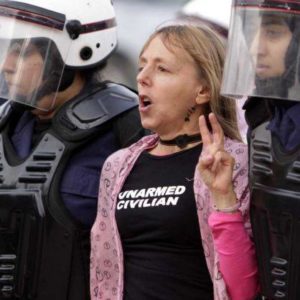 CodePink: On Trade Deals, Trump’s ‘the One Who’s Actually Good’

Medea Benjamin, the longtime lefty activist and founder of the anti-war group CodePink, said after Monday’s first presidential debate that Donald Trump was better than Hillary Clinton on the issue of trade.

Speaking on a post-debate panel at Busboys and Poets in Washington, D.C., Benjamin credited the Republican nominee with opposing trade deals like NAFTA and TPP, both of which Democratic nominee Hillary Clinton used to support and now opposes.

“It is very strange that the businessman who thinks we create jobs in this country by trickle-down [economics], by giving tax breaks to the rich because they’re going to create jobs, which is totally false, is also the one who’s actually good on the trade deals and calls it like it is,” she said.

In Benjamin’s view, trade was the issue where Clinton “did her worst” in the debate, since the former secretary of state tried to suggest she wasn’t previously supportive of the deals.

“I don’t think we can trust her on that one,” Benjamin said.

Another fan of Clinton’s performance on the Busboys panel was Bill Ayers, the Chicago education scholar and former 1960s radical whose controversial association with Barack Obama featured in the 2008 presidential campaign. Ayers also supports Stein, but said Clinton was likely to win the election despite being “the establishment, neoliberal, warmongering Wall Street candidate.”

“As much as I’ve disliked her for a long, long time, she said things that aren’t often said on a national stage,” Ayers said. “She said that Trump was involved in a ‘racist lie.’ She used that language. That was kind of incredible to me, that she would step up and say that. She actually had him on the mat.”