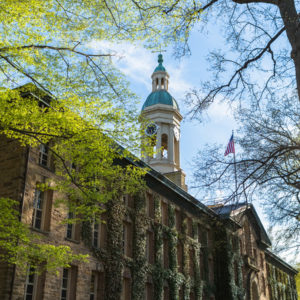 Last week at Princeton University, a gaggle of students went to a class, then quickly scurried out. It wasn’t a fire drill. It wasn’t one of those active-shooter cases that we have seen far too many times on college campuses.

No, in this case, several — but not all — students walked out of an anthropology class after a professor repeatedly used the N-word as part of his lecture.

The self-explanatory name of this class is: “Cultural Freedoms: Hate Speech, Blasphemy and Pornography.” The professor is Lawrence Rosen, a white 40-year veteran of Princeton.

To be real, that is a most intriguing question because mere words truly can be painful. In fact, it’s a valid question in the construct of today’s heightened sensibilities, especially following the historic Barack Obama administration and living in real time during the volatile Donald Trump regime.

And especially in February, which also is Black History Month.

Rosen’s lecture on that particular day focused on verbal oppressive symbolism and he didn’t apologize for saying that troublesome word three times instead of the N-word abbreviation. The professor was right to refuse to issue an apology.

However, Dr. Harry Edwards, a black acclaimed former professor of sociology at the University of California-Berkeley for 32 years, disagreed, as he argued that Rosen broke the relationship of trust with his students.

“Now, these aren’t bad people — the professor and the students. This is not about enemies. The issue is about how do we repair this,” Dr. Edwards told InsideSources.

“The students may not have been right with the response they had in walking out, but the response was an honest one. Remember, these are young people trying to figure things out. The fault is on the teacher. Anybody who comes in dropping N-bombs like that is making a resume statement for himself and his legacy. I don’t care if it’s a black rapper, a politician, an athlete, a professor. It reveals who and what you are, and it is indelibly attached to your legacy.

“If I were him (professor), I would write an essay for the school newspaper. First,

I would establish that I care about the students, that I want to establish the requisite level of trust and caring. Second, I would tell them that I didn’t put them on the proper trajectory to learning in this class. Instead, the train went off the tracks. Third, in the essay, I would thank each and every one of the students for teaching me (professor) something. I need to frame up the issues in a better way so the students can understand what I am trying to teach. And I would welcome them back to class so we can teach and learn together.”

OK, that’s Dr. Edwards’ personal point of view. But let’s make a couple of points for the other side:

(1) So why take the class? If it is a class on hate speech, then shouldn’t one expect to hear hateful, harsh words that make you gasp. How else can a professor teach this class?

(2) Some of students who probably listen to gangsta rappers incessantly using the N-word in their iPhone playlist recoil at a professor discussing the word in the context of academic freedom. Isn’t that a double-standard?

Furthermore, they may be young college students, but they still are legal adults able to engage in adult conversation. And by all media accounts, the classroom featured white and black students, with both races quarreling with Rosen for most of the lecture.

According to the HuffPost, which reached out to some of the students, the discomfort in that room rose to the point to which Princeton officials announced they will meet with the students. Moreover, acting university spokesman Michael Hotchkiss, in a statement to the HuffPost, said the banter in the class is “part of the vigorous engagement and robust debate that are central to what we do.”

However, Destiny Salter, a black 19-year-old student in the class, explained to the HuffPost: “(Rosen) very easily could have stated the same question and just said ‘the N-word’ rather than saying the actual word. That would have sparked discussion, which is what he supposedly wanted. Saying the actual word simply offended the class and derailed the entire conversation.”

OK, with that, perhaps it’s time for a warning label, the likes of which we see on television and at movie theaters. This class should be accompanied by an “R” rating disclaimer in the school’s curriculum guide: “Some content and/or speech in this course could be considered offensive by attendees.”

Put that out on Front Street.

In fact, maybe every college class should be advertised with some type of advisory with number or letter grades signifying the level of possible aggressiveness or even pacifism.

Then, the message is out — similar to baseball tickets, which clearly state that spectators could be hit by foul balls.

Be vigilant. Attend at your own risk.