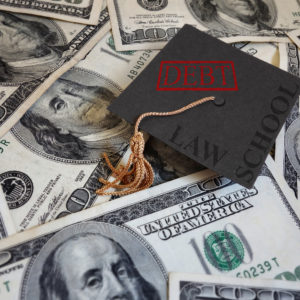 For College Grads, the Price of Public Service Shouldn’t be Huge Debt

In 2007, Congress and President George W. Bush realized that jobs critical to the day-to-day operation of our country and crucial to the well-being of millions of Americans would go unfilled.

The reason? It is difficult to choose a career in public service if your student loan payment is nearly the same as your salary.

The solution? Our government made a promise, the Public Service Loan Forgiveness Program, which forgives student loan debt after a decade of on-time payments for borrowers who work for qualifying employers, including the government and nonprofit sectors.

In recent years, more than 500,000 Americans chose careers in public service — including government attorneys, prosecutors, public defenders, teachers and social workers — relying on that promise. They made life-altering decisions that affected their careers and financial futures. Now that promise may be broken, leaving many of them in a desperate situation.

The program requires sacrifice by young people. A college graduate with student loans qualifies by working for 10 years at a government agency or nonprofit group and making qualifying loan payments for 10 years. At the end of that time, the federal government forgives the remainder of the loans. The first young people entered the program in 2007 and are scheduled for loan forgiveness on the balance of their student loans in October.

Now that program is in jeopardy.

Unfortunately, the Department of Education has misled participants in the program and reneged on its commitments to them. Initially, the department told many young graduates that their jobs qualified for the program. Years later, the department informed some of these same young people that they did not qualify — after they had been working for years in lower-paid public service jobs. The American Bar Association has sued the Education Department on behalf of four participants in the program. The department has defended itself by blaming a contractor — paid by taxpayer dollars — it hired to administer the program

And in a court filing on July 31, the Education Department now claims it does not have to decide on participants’ eligibility until after they work 10 years and make 120 qualifying monthly loan payments. That’s outrageous. The department has turned the program into a decade-long, high-risk guessing game for participants. It could burden many with huge balances on their student loan debts if the Department of Education retroactively decides they do not qualify for the program.

Thousands of young people — teachers, engineers, lawyers, social workers and more — made major life decisions based on information provided by the department and its contractor. They took jobs and moved their lives based on this information. Participants followed the rules and now some are paying a steep price for the department’s mistakes.

But that’s not the only way young people are losing out. The White House has proposed eliminating the Public Service Loan Forgiveness Program entirely. That would mean many college graduates with large student loan balances couldn’t afford to work in public service jobs.

In the legal profession, it could mean fewer prosecutors and public defenders, fewer city and county attorneys, and fewer legal aid lawyers. It could produce a shortage of top legal talent for nonprofit groups that help veterans, the elderly and the poor. Fewer lawyers and other professionals would be able to join programs that benefit struggling families in America and fledgling democracies abroad.

Eliminating the Public Service Loan Forgiveness program is short-sighted and wrong. It would hurt every American.

Public-interest lawyers don’t earn high salaries given their years of training. At a time when the poverty level for a family of four is about $30,000, legal aid lawyers start at $44,600, according to the National Association for Law Placement. Public defenders in New Orleans start at $45,000. And lawyers with years of experience who represent unaccompanied immigrant children on the Texas border earn, on average, $52,500. Many carry loan balances five times their salary.

Public Service Loan Forgiveness is not a giveaway. It requires years of hard work at low pay. It’s a lure for the smartest young people to serve their neighbors, cities, states and nation without risking financial ruin.

The American Bar Association urges Congress to preserve this valuable program and urges the Department of Education to treat participants fairly. Ordinary Americans need public servants to fight for their interests. The Public Service Loan Forgiveness program does exactly that.

Linda A. Klein is president of the American Bar Association.