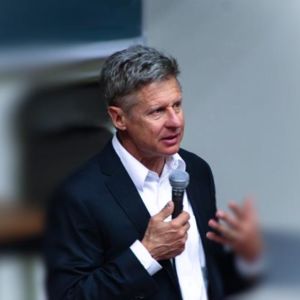 “We are the Praetorian Guard,” John McAfee says.

The antivirus software pioneer is talking about the security force that protected Roman Emperors, comparing it to a contemporary but no less distinctive group, to which he himself belongs. It’s May 16, he’s on stage in Las Vegas, and another debate among the Libertarian Party presidential primary candidates is underway.

Can America’s third largest political party finally change the game this year, capitalizing on the unpopularity of Republican nominee Donald Trump and Democratic standard-bearer Hillary Clinton? McAfee says yes, “By being as crazy as we can. By being as revolutionary as we can.”

He jokes that Libertarians should run naked in the streets to attract attention. At one point he adds, “We need to alert the American people to the fact that we may be lunatics, but we are the right kind of lunatics.”

For a surprising number of Americans at the moment, this message has some appeal. Two recent national polls show the Libertarian front-runner, former New Mexico Gov. Gary Johnson, snagging 10 percent of the vote against Trump and Clinton. After he won less than one percent of the general election vote as the party nominee in 2012, there’s reason to believe he can do better this time.

But before Johnson can think about that — and persuading the Commission on Presidential Debates to include him this fall — the governor needs to get through this weekend’s Libertarian Convention in Orlando, where he’s up against McAfee and Austin Petersen, a 35-year-old former Fox Business Network producer for “Freedom Watch” with Judge Andrew Napolitano.

By the traditional standards of politics, McAfee looks less likely to present a credible challenge. He’s still a person of interest in the murder of one of his former neighbors in Belize, though he insists he had “absolutely nothing whatsoever to do with” the killing.

In a dramatic op-ed recently published in Business Insider, for example, he cops to “a life that has been lived entirely out of the box … influenced by minds such as Henry David Thoreau and Ralph Waldo Emerson.” He talks about years of drug use, jail time and his marriage to a former prostitute. Then, endeavoring to lay the Belize issue to rest, he presents evidence of an elaborate government plot to kill him, saying officials were threatened by his exposing their corruption.

“I am walking revolution,” McAfee says in Las Vegas, “with all of its drawbacks and all of its risks.”

A less risky choice to challenge Johnson, including for some conservatives closer to the political mainstream, is Petersen. Notwithstanding his obvious youth, he looks and sounds more like a traditional candidate, to the extent that any Libertarian comes across as traditional. He previously ran multimedia content for FreedomWorks, and he’s a self-styled “pro-life secularist” endorsed by the iconic Republican strategist Mary Matalin. Talk show host and media mogul Glenn Beck, whose own politics are fairly libertarian these days, has spoken glowingly about him as well.

In Vegas, Petersen strikes a ninja pose as he takes the stage — Napolitano used to call him “Freedom Ninja” — and says he’s running on “taking over the government to leave everyone alone.”

Even beyond abortion, there are notable difference between Johnson and Petersen.

The governor, who ran his state from 1995 to 2003, is less doctrinaire and more pragmatic in his limited government views. He supports some federal funding for scientific research and believes bakers should make wedding cakes for gay couples, regardless of their personal beliefs.

Petersen, by contrast, says “private people ought to be allowed to discriminate” and suggests this issue could sink Johnson’s candidacy. In a pair of recent interviews with Beck, it’s part of his broader appeal to more culturally conservative Libertarians. He tweaks Johnson for talking publicly about getting high and knocks the governor for picking former Massachusetts Gov. Bill Weld, a Republican moderate, as his running mate. Petersen even gets in a shot at President Barack Obama, calling the Democrat a weak commander in chief.

For his part, Johnson doesn’t seem worried about running as a “fiscally conservative” and “socially tolerant” candidate. Back in March, he was happy to draw contrast with pro-life Republicans in an interview with InsideSources. In the same conversation, he predicted there was “no way” Trump could beat Clinton in the White House race.