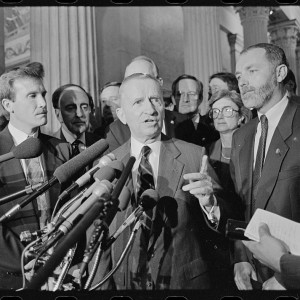 H. Ross Perot, in the Capitol here in 1993, was the last third-party candidate to appear on the debate stage, in 1992, with the Republican and Democratic nominees. (Photo from Library of Congress collection)
News

With the explosion in the last decade of 24/7 political coverage over airwaves and the Internet, the country’s once-every-four-years presidential sweepstakes might seem more open and transparent than ever.

But if there remains one secretive, smoke-filled backroom in the process of picking an American president, says Peter Ackerman, it’s the Commission on Presidential Debates — a powerful, privately-funded nonprofit that does much of its work behind closed doors.

Ackerman, a millionaire financier who heads up a third-party advocacy group known as Level the Playing Field, says the CPD cultivates its low profile because its primary purpose isn’t just staging debates every four years — it’s protecting the status quo for Republicans and Democrats by keeping alternative candidates off the stage and out of the national spotlight.

The commission — which did not respond to requests from InsideSources for comment on this story — shares far too little information about how its panel of leaders make their decisions, says another Level the Playing Field backer, former State Department official and longtime Washington news executive James K. Glassman.

“Their lack of transparency is a betrayal of American democratic values,” Glassman, a former Atlantic Monthly and New Republic publisher, told InsideSources. “They are very, very powerful and yet they are a self-perpetuating body that keeps its deliberations and the results of its deliberations secret.”

Level the Playing Field and other third-party advocates, including the Green Party and the Libertarian National Committee, filed a lawsuit earlier this year against the Federal Election Commission, which is charged with overseeing the rules for the nonprofit CPD.

The 47-page lawsuit, filed Aug. 27, accuses the FEC and the CPD of stacking the deck in favor of the two major parties.

The lawsuit, pending in the U.S. District Court for the District of Columbia, accuses the CPD of violating FEC rules that state debates must be staged in a nonpartisan manner.

The Dec. 5 letter from Level the Playing Field comes after the CPD, which has controlled all general election presidential and vice presidential debates since 1987, announced in late October that the rules for the 2016 debates would, again, not allow third party or independent candidates on stage next fall unless he or she polls at 15 percent in national surveys.

The Ackerman coalition contends that under the 15-percent rule, in place since 2000, no third-party candidate would have been invited onto a debate stage in decades —including H. Ross Perot in 1992.

Defenders of the debate commission are quick to point out that no third party candidate in modern history has had a realistic shot at winning the presidency.

But whether third-party candidates can win isn’t the point, advocates say.

Glassman, who served in the State Department under former President George W. Bush, said outsiders — like Perot in 1992 — inject new ideas into the process and force both parties to rethink political orthodoxy. Opening up the debates, he told InsideSources, could help Republicans, Democrats and independents find common ground on the most complex problems facing the country.

“Americans believe that their political system is broken and they think that the solution is to have more choices,” he said. “And we are being denied those choices right now.”

In a Gallup poll released earlier this year, a record 43 percent of Americans eschewed a party affiliation, choosing instead to identify politically as independents.

In a statement accompanying the Oct. 29 announcement of the 2016 rules, CPD co-chairmen Fahrenkopf and McCurry defended the decision to stick with the 15-percent benchmark:

“The CPD’s debates are not intended to serve as a springboard for a candidate with only very modest support,” they wrote. “Participation in the debates is determined by the level of public support a candidate enjoys as Election Day approaches.”

Both men contend the commission took into account the growing percentage of voters unwilling to affiliate themselves with either party.

“We are mindful of the changes in the electorate and the large number of voters who now self-identify as independents. We believe our candidate selection criteria appropriately address this dynamic.”

In an email sent earlier this week to his Level the Playing Field supporters, Ackerman struck an optimistic note for the future while acknowledging that the CPD had rejected the group’s “Change the Rule” suggestions for the 2016 debates.

“Your efforts have helped lead to dissent within the CPD Board itself,” he wrote. “The CPD’s vote to retain the current rule was passed by a majority rather than with their typical unanimity. These unprecedented cracks in the status quo have laid an important foundation on which we and others can build in the future.”

The CPD was created by the Republican and Democratic parties in 1987 after the League of Women Voters, citing what the organization deemed as unacceptable demands from candidates and the two parties, opted out of the presidential debates.

The commission is charged by the FEC with staging the debates as a nonpartisan organization. In their lawsuit, the third-party groups argue that the CPD isn’t nonpartisan, it’s a bipartisan duopoly.

In addition to Fahrenkopf, a CPD co-founder and former head of the Republican National Committee, and McCurry, a former Clinton administration press secretary, the CPD board includes:

Former President Bill Clinton, whose wife Hillary is likely to be one of the two participants in next year’s debates, is also listed on the CPD website as an “honorary co-chairman,” along with former President Jimmy Carter, though there is no mention of the two living Republican ex-presidents, George W. Bush and his father George Herbert Walker Bush.