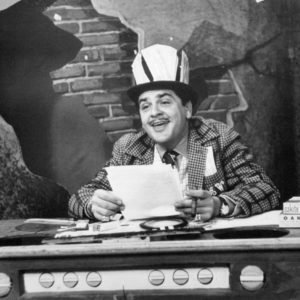 Communications, From Kovacs to COVID

Those who understand this and successfully adapt will flourish in the post-COVID-19 world. Those who don’t will shout into a din of electronic conversation— unheard, unnoticed and perhaps unemployed.

The challenge is to become a latter-day Ernie Kovacs.

In the late 1940s, America adopted television, and early programs looked like vaudeville through a camera. But soon, comedian Ernie Kovacs perceived the dullness of, and reinvented, TV.

On a stage, a comedy skit might take five minutes — a lengthy setup, lots of back-and-forth, and finally, the punchline. Why so long? Because onstage, it takes time for curtains to rise, actors to find their marks, and audiences to quiet down. If these processes take two minutes, the audience won’t be satisfied with a one-minute skit.

For theatrical performers to reach the nosebleed-seat patrons, they must exaggerate their cadence, expressions and movements, pausing frequently so audience members can absorb distance-muffled dialogue.

Kovacs constructed a show around dozens of tiny, often technically dazzling skits. In one, Kovacs is a used-car salesman slapping the hood of a 1955 Nash Metropolitan. Instantly, the concrete beneath the car shatters, the car falls through into oblivion, and Kovacs stares into the void.

The entire gag lasted six seconds and cost $12,000 to produce (around $110,000 in today’s money). Despite its brevity — or perhaps because of it — it’s still remembered while the mass of vaudeville-like routines are forgotten.

Theatrical productions typically last an hour or two. Why? Because if patrons spend a couple of hours getting dressed, driving to the theater, parking, making their way to seats, and then reversing the process when leaving, you’d better provide them with ample stage time.

Kovacs realized that a half-hour would suffice for homebound viewers, and that some might simply wish to watch 5 or 10 minutes of rapid-fire skits.

Kovacs also realized that cameras could dazzle in ways that stage performers could never replicate. For example, using a tilted stage and camera, his drink poured from a Thermos at an angle missed the glass beneath it and streamed into the lap of a disgruntled man.

With COVID-19, business and academic communications have moved online. Pre-COVID, lectures and panel discussions typically lasted an hour for the same reason that stage productions do.

If a company invites 100 people to drive, park and make their way to seating, the company had better provide an hour’s worth of lecture — even if there’s really only 10 minutes of information. Same with college classes.

This results in long, dull, static, droning lectures. Museums are replacing one-hour, in-person lectures with one-hour online lectures. College professors yammer for an hour before the dull, unblinking eyes of their laptop cameras.

What might Kovacs do? (I speak as someone who has taught 45 semester-long courses online.) Here are some thoughts:

— Rather than a live one-hour lecture, consider posting a series 5- or 10-minute videos, allowing audience members to fit your message into small, discrete packets of time between other tasks — on their schedules.

— Use live formats for the speaker and audience to confer after everyone has already seen a video or read materials separately.

Above all, ask yourself how YOU would prefer to spend an hour. Watching one person’s lips moving solemnly? Or clicking through a series of vibrant videos, charts and texts, followed by a lively discussion?