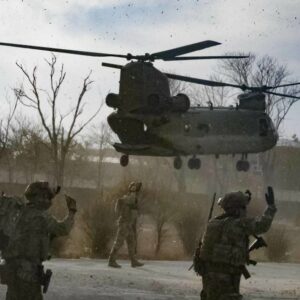 The decision by the Democratic Congress is to end any meaningful inquiries into what happened in the recent withdrawal of U.S. forces — though not all civilians — from Afghanistan.

The nation has to look to the State and Defense Departments — both of which were directly involved in the operations — to conduct reviews.

“Reviews that do not result in action or named responsible people, particularly at the senior levels, means whatever lessons are learned are simply washed away and purposely hidden from public scrutiny,” said Robert Wilkie, former Secretary of Veterans Affairs and Undersecretary of Defense. “It’s imperative that mistakes are clearly enumerated.”

Politico, the outlet that broke the story on the State Department investigations, elaborated on the scope.

“(It) …will focus on the State Department’s Special Immigrant Visa program; Afghans processed for refugee admission into the U.S.; resettlement of those refugees and visa recipients; and the emergency evacuation of the U.S. Embassy in Kabul.”

The State Department presumably employs some of the stranded Americans and bears most of the responsibility for the persons issued special immigrant visas (SIV) and others who provided support to U.S. forces during the 20-year operation.

Keep in mind that inspector general (IG) Diana Shaw does not answer to the secretary of state. Her position, equivalent to an assistant secretary, is independent, but she is of course subject to firing by the president at any moment he chooses. IG’s sometimes go off-script and leave administrations red-faced.

She is also in an acting capacity and may want to become a permanent IG.

IG investigations can also go on for a very long time. There is no date certain for completion and no one knows how much of the report goes public.

Secretary of Defense Lloyd Austin directed the U.S. Air Force to appoint a three-star-level officer to review all aspects of the operation in a 45-day period to prepare a report. The start date for the 45-day clock is unknown.

While a possible conflict of interest exists, in-house reviews do not always come out as politically pre-ordained.

The officer chosen to conduct the investigation will realize that his or her findings can have personal effects on his or her own career.

We recall the effect investigations have had on investigating officers. For example, retired Army Maj. Gen. Anthony Taguba, the lead investigator looking into alleged abuses in Abu Ghraib military prison in Iraq, was highly critical of the Bush administration’s policies that may have played into the abuses. Taguba was not promoted again.

We will never hear President Joe Biden proclaim he or his administration made any mistakes. He will allow for the technical tinkering that Washington-based reviews often become — such as a claim in a report that new rules need to be put in place, or further reviews are needed.

Biden will not accept that the operation was faulty nor that there were problems with his decisions, no matter what any report says or who writes it.

As former Defense Secretary Robert Gates stated on a recent episode on CBS News’ 60 Minutes, “I’ve worked for eight presidents… I– I’ve never encountered a single one of ’em whoever– whoever said, ‘Well, I really blew that one.’”

One thing that may very well emerge and even expand, will coincide with the statements by Austin, Chairman of the Joint Chiefs of Staff, Army Gen. Mark Milley, and U.S. Central Command commander, Marine Corps Gen. Kenneth McKenzie in Senate and House hearings Sept. 28 and 29.

Each of the military leaders offered a different recollection about the advice they dispensed to the president. Biden said no one disagreed with him; the leaders said that none of them agreed with him. Possibly we may see the depth of disagreement go past that of the senior leaders and it may well include many leaders on the ground.