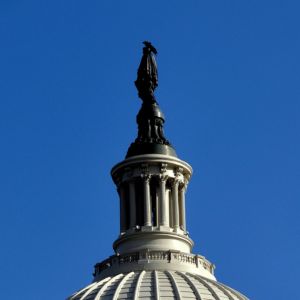 Posted to Politics October 04, 2017 by Daniel Schuman and Eli Lehrer

At the top of the U.S. Capitol stands the statue of Freedom Triumphant, the work of sculptor Thomas Crawford. The statue, originally approved by then-U.S. Secretary of War Jefferson Davis, was installed in 1863 during a Civil War that, as president of the Confederacy, Davis himself led to defend slavery.

Both as a symbol and as an example of 19th-century craftsmanship, Crawford’s work is worth appreciating. But the same cannot be said for several less-exalted statutes of civilian and military leaders of the Confederacy — men who led the war against the United States. The states that contributed these sculptures to the Capitol should do the right thing and replace them with other, more fitting monuments. Until then, a congressional committee with the power to remove these statues from public view should do so.

No matter what some apologists for the cause may say, it is absolutely clear the Confederacy started the Civil War and did so in order to preserve slavery. We know this because the South fired the first shots and because in their ordinances of secession, all of the states that gave reasons for leaving the union said that they were doing so to defend slavery. If that isn’t enough, consider the frank description of the Confederacy’s ideals provided by Alexander Stephens, Davis’ vice president.

The “cornerstone” of Confederate government, he explained, “rests upon the great truth, that the negro is not equal to the white man; that slavery — subordination to the superior race — is his natural and normal condition.”

In light of such sentiments, it is deeply disturbing that Stephens, Davis and an additional six men who played an active role in making war on the United States have memorial statues in the U.S. Capitol.

After the South’s defeat in the Civil War, of course, the slave system formally ended in America but the racial discrimination that undergirded it did not. Indeed, many former Confederates and their ideological fellow travelers — many of whom had held high offices in the Confederacy — used a mix of terrorist attacks and unconstitutional “laws” to create the Jim Crow system that oppressed African-Americans for nearly a century. That system has left an enduring legacy.

Most of Confederate monuments in the United States were erected during the Jim Crow era and were intended as affirmations of white supremacy and sentinels of its power. Within the Capitol, each state selects two statues to send for display. Under Jim Crow, the legislatures of seven former Confederate states chose monuments that depicted leaders of the Confederacy. Whatever else these men may have done in their lives, it does not excuse the fact that they led their people to commit treason.

Accordingly, all of these eight statues should go. The U.S. Capitol is not merely a building; it is one of the most recognizable symbols of the United States of America. As such, the high honor of being commemorated within its halls should go only to people who supported, exemplified or helped build the country. Clearly, those who actively tried to destroy it are not fitting symbols, and this alone — not personal virtue or even opinions on slavery — should be the criteria for removal.

Indeed, there are other statues of people in the Capitol who were virtually bereft of personal virtue — such as former Louisiana Gov. Huey Long — as well as vehement supporters of slavery — such as South Carolina statesman John C. Calhoun. Whatever their defects, at least they did not commit treason the way leading Confederates did.

Likewise, service to the Confederacy during the war should not be disqualifying either: eminent lawyer Uriah Milton Rose and Supreme Court Chief Justice Edward Douglas White both served the Confederacy at low levels but made their names in the law long after the war.

But treason in defense of white supremacy? That’s just not acceptable.

There’s an easy way to solve this. After all, private entities raise the money to build the statues and states are free to replace after they have been on display for 10 years.

While it might be desirable to pass a bill such as the one introduced by Sen. Cory Booker, D-New Jersey, and Barbara Lee, D-California, another approach may be more expeditious. The speaker of the House and vice president of the United States (acting in his capacity as president of the Senate) should ask the legislatures of the states that have sent Confederate statues to declare their intent to replace them and find representatives of their states who are not guilty of treason.

In the meantime, of its own volition, the Joint Committee on the Library should instruct the Architect of the Capitol to relocate the statues to another place in the building that is far from public view. If states do not find solutions within a reasonable amount of time, Congress should take a vote on a bill like Booker’s and return the statues.

In short, the continued presence of Confederate statues in the U.S. Capitol embarrasses America, and thus there is no good reason to delay their removal.

Daniel Schuman is policy director at Demand Progress; Eli Lehrer is the president of the R Street Institute.