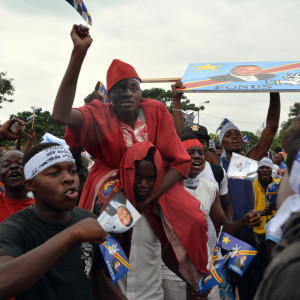 This year, elections dominate the news both in the United States, where they are likely to occur, and in the Democratic Republic of Congo, where they are not. Since mid-September, large protests have shaken the capital city as dissatisfied voters attempt to pressure the government into holding elections. The central African nation has been ruled by President Joseph Kabila since 2001, but the second of Kabila’s two constitutionally-permitted terms will expire in December.

To the alarm of foreign observers, the prospect of quick elections in the Democratic Republic of Congo remains slim. On Monday, the European Union officially voted to prepare sanctions against the country unless Kabila steps down at the conclusion of his term.

During their discussion, the two attempted to justify the recently-released election calendar. According to this calendar, elections would not be held until 2018.

Kikaya explained that the expanded timeframe was necessary since it would take considerable time to register the 650,000 expected voters and to assemble the lengthy ballots.

These ballots, which one of the speakers displayed, can be as long as 53 pages. For each opening in the regional and national parliaments, a candidate’s name, party, picture, and party symbol are printed in the ballot. Since there are 523 political parties in the Congo and the presidential election alone is expected to have 23 candidates, it is possible that ballots could become even longer.

While he repeatedly referenced the constitution, Kikaya tacitly acknowledged the reality of the situation.

“President Joseph Kabila must be given the chance to [to have a peaceful transition of power] because of the constitution and also the fact that he controls the levers of power,” he said.

It’s a reality that Nangaa did not contest. Speaking through a translator, the elections commissioner largely agreed with the assessment Kikaya offered, stressing the need for elections, but downplaying any attempts to push the timeline forward.

According to Nangaa, a significant shift of the calendar would be a practical impossibility. Given the necessary preparation work, including a census, voter registration, and candidate registration, the earliest possible election date would be sometime in November 2018. Even deciding to hold a smaller election for just the presidency would only cut a few months off of that projected time.

“We do have democratic institutions in place,” said Nangaa. “However since democracy has been established in the last ten years we have never been able to hold all the elections specified in the constitution.”

Out of the eleven types of elections specified, Congo has only been able to hold at most five of the required elections, and this year looks to pass without any election at all. The senate was elected in 2007 and provincial assemblies have been sitting for ten years.

Nangaa was careful not to provide any possible reasons why that might be. Instead, he focused on the struggles they faced registering and organizing the vote. Nangaa’s organization is currently responsible for creating the voter registries and preparing the ballots with their hundreds of candidates.

Despite Nangaa’s purported wish for a quick electoral process, his statements on the protests gathering in the capitol of Kinshasa reiterated rather than contradicted Kikaya’s.

“A national dialogue is underway, but we are not sure what the outcome will be,” he said of the protests.

Meanwhile, Kikaya downplayed the unrest, saying that “Attempting to judge the political situation in the DNC by the demonstrations in Kinshasa would be incorrect.”

In this, as in some of their other remarks, the two speakers represented more an appearance of choice rather than significant differences. Although Nangaa’s title gives him the responsibility for ensuring free and fair elections in the Congo, to take office, he needed to receive both a favorable vote from the national assembly and presidential confirmation.

One reporter questioned why Nangaa was sitting next to Kikaya, the diplomatic representative of the president “believed to be the architect of the current crisis.” Nangaa tried to downplay the question—and his connection for Kikaya—saying that both speakers appeared as guests and attributing his private remarks to Kikaya as merely a hello to his countryman.

That may be, but the two seemed more cordial to each other than opposing political figures often are. At the end of the hour, the discussion concluded without a sense that any significant differences of opinion actually existed. For observers hoping for elections sooner than 2018, that in itself is a concerning sign.