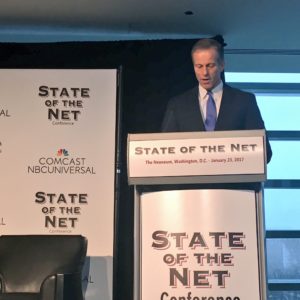 A powerful Republican in the Senate’s telecommunications policy committee is the latest lawmaker to signal Congress will take up net neutrality in the wake of a possible Federal Communications Commission repeal, action Republicans hope will bring Democrats to the table.

South Dakota Republican Sen. John Thune said he’s “committed to the cause” of net neutrality, and suggested the threat of the newly-Republican controlled FCC repealing the rules may convince Democrats to get on board with a legislative solution.

“Who knows, the reality of a Republican FCC may help inspire some of my Democrat colleagues to embrace the idea that a bipartisan, legislative solution is the best possible outcome,” Thune told the State of the Net conference in Washington Monday.

Pai and Commissioner Michael O’ Rielly, his Republican colleague, said in December they intend to use their new majority to “revisit” the rules “as soon as possible.” President Trump has reportedly already signed onto a plan to move consumer protection and competition authority from the FCC to the Federal Trade Commission.

Extending its authority to regulate internet providers, privacy, and issues like zero rating are symptoms of the FCC finding “its role in the world gradually diminishing,” according to Thune. The chairman suggested net neutrality could be rolled into legislation to reauthorize the FCC’s overarching mission.

“The last time Congress passed meaningful laws affecting the FCC was in the mid-1990s when the internet was just in its infancy,” he said. “It is clearly time for FCC reform.”

Thune was working on legislation to ban internet providers from web traffic throttling, blocking and paid prioritization — the cornerstones of net neutrality — before the FCC passed its rules in 2015. The FCC’s Open Internet Order went a step further by reclassifying internet providers as common carriers, a public utility designation subjecting them to more stringent FCC oversight.

“Complex and ambiguous regulations that shift with the political winds aren’t in anyone’s best interest,” Thune said. “For people to get the maximum benefit possible from the internet, they need certainty about what the rules are, and most importantly, what the rules will be in the coming years. And the only way to achieve this is for Congress to pass bipartisan legislation.”

Thune touted his committee’s record from the last congressional session, which included passing a reauthorization bill and Thune’s MOBILE NOW Act, neither of which made it into law. The committee finished markup on MOBILE NOW Tuesday, paving the way to pass the bill aimed at freeing up federally-held airwaves for crowded wireless carriers and help them deploy infrastructure for 5G.

Tennessee Republican Rep. Marsha Blackburn, the new chair of the House Subcommittee on Communications and Technology that oversees the FCC, agrees. Blackburn said in December Thune’s legislation would be a good place to start.

“A legislative fix is going to give you in the industry the certainty that you need so that you know what the rules of the road are for standards for internet conduct,” she said.

Another alternative would be for the Federal Trade Commission to take over regulating internet providers, as it did before the FCC passed the Open Internet Order. While speaking at the same conference Monday, Republican FTC Commissioner Maureen Ohlhausen said the FTC could use its antitrust and consumer protection authority to police net neutrality.

But a recent federal court ruling could block the FTC from overseeing internet providers if the FCC moves too fast to repeal, Ohlhausen warned.

The Ninth Circuit Court of Appeals decision bars the FTC from taking action against any company acting as a common carrier — the new classification for internet providers under net neutrality, and one the FTC is legally prohibited from regulating.

Should the ruling in favor of AT&T withstand an appeal from the FTC, and with an FCC repeal of net neutrality likely, it will be up to Congress whether to pass new rules of its own or repeal the FTC’s common carrier exemption.