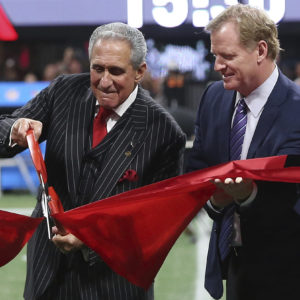 Posted to Politics January 03, 2018 by Michael Farren and Anne Philpot

In the midst of an NFL season rife with controversy, Congress has added more fuel to the fire. The final tax reform bill cut a House provision that Americans of all political stripes can agree on: closing the loophole that subsidizes stadium construction. Despite many previous attempts to end this absurd giveaway, real reform has failed once again.

It’s no secret that state and local governments give tax money to professional sports teams, but not many people realize that the federal government — and therefore, every taxpayer — is on the hook, too.

Because interest from municipal bonds is exempt from federal income taxes, the $13 billion in municipal bond handouts given to stadiums that opened between 2000 and 2016 adds up to $3.7 billion in federal taxpayer losses. That’s the cost of 39 F-35 Joint Strike Fighters or two Arleigh Burke-class destroyers.

Seventy-two sports team owners are billionaires, and most teams are worth at least $1 billion, so it’s ludicrous when they ask for government handouts, let alone tax breaks on the handouts. As Rep. Steve Russell, R-Oklahoma, said: “People in Oklahoma, or in New Hampshire, don’t need to be paying for (a stadium) in Nevada.”

How did this happen? The Revenue Act of 1913 exempted the interest earned on municipal bonds to encourage investment in public infrastructure. Over the next 40 years only three stadiums were built with municipal bonds: the Los Angeles Coliseum, Chicago’s Soldier Field and Cleveland’s Municipal Stadium — all to support Olympic bids.

But in 1953, the dam burst when baseball’s Boston Braves jumped ship to Milwaukee’s publicly built stadium (before moving to Atlanta 12 years later). A flood of teams followed, moving to new, publicly financed stadiums. Congress tried to rein it in by limiting the eligibility for tax-exempt status in the Revenue and Expenditure Control Act of 1968, but a specific exemption for sports facilities was slipped into the final bill.

The Tax Reform Act of 1986 removed the stadium carveout and added more restrictions on tax-exempt municipal bonds. However, the law backfired, creating an all-or-nothing situation where at least 90 percent of the municipal bond debt service had to be publicly funded to qualify for tax-exempt status. So rather than ending stadium subsidies, Reagan’s tax reform actually encouraged more public money to go to stadium construction.

In 1996, Sen. Daniel Patrick Moynihan, D-New York, tried to fix the problem he helped create in 1986, but his proposal was shot down by a “hail of lobbying fire.” Following this in 1997 and 1999, Rep. David Minge, D-Minnesota, unsuccessfully tried to limit subsidies by taxing them as corporate income.

But even the House’s version of tax reform wouldn’t have stopped stadium subsidies completely — it would have just made them more expensive for local politicians. A full solution requires that we either strip policymakers of the power to dole out money to billionaire team owners, remove the incentives for owners to seek subsidies, or both.

In congressional testimony, economist Art Rolnick suggested simply imposing a 100 percent tax on stadium subsidies. This way, if local lawmakers offer a handout — like the $750 million Nevada is giving the NFL’s Oakland Raiders to move — the IRS would send a tax bill to the team owner for an equal amount.

Rolnick’s proposal seems ridiculous, but it’s actually a stroke of genius. Stadium subsidies are a vicious cycle of reform-resistant cronyism because it’s political suicide for lawmakers to get between fans and their teams. This plan would allow local leaders to rail against overbearing federal authorities, while secretly thankful they’ve been rescued from an impossible situation.

For a moment it looked as if we might finally eliminate America’s most brazen tax giveaway, but Congress fumbled on the goal line. Like many sports fans, we’re left saying “there’s always next season.” It is hoped by then we’ll have figured out how to remove the incentive for teams to pursue government-granted privilege in the first place.