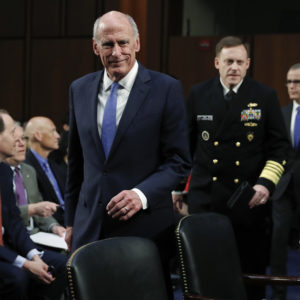 Lawmakers went after intelligence community leaders in the Senate Wednesday for again failing to provide Congress with an estimate of the number of Americans incidentally caught up in broad National Security Agency foreign spying powers set to expire later this year.

Senators on the Intelligence Committee were frustrated by NSA, FBI, and ODNI leaders’ continued inability to estimate how many Americans are incidentally swept up in surveillance conducted under Section 702 of the 2008 FISA Amendments Act, set to expire in December.

Section 702 authorizes NSA to tap the physical infrastructure of internet service providers, like fiber connections, to surveil the content of foreign emails, instant messages, and other communications as they exit and enter the U.S. Privacy advocates say such collection facilitates a loophole for NSA to incidentally collect data belonging to American citizens, and likely amounts to millions of warrantless interceptions.

Lawmakers must decide whether to reauthorize the law by the end of December. Many, including Oregon Democrat Sen. Ron Wyden, don’t want to do that until they know how many Americans are affected. The most heated portion of Wednesday’s hearing related to 702 came when Wyden blasted Director of National Intelligence Dan Coats for failing to provide that estimate, despite pledging to do so during his confirmation hearing earlier this year.

“As recently as April you promised Americans that you would provide what you called a relevant metric for the number of law-abiding Americans who are swept up in the FISA 702 searches,” Wyden told Coats. “This morning you went back on that promise, and you said that even putting together a sampling — a statistical estimate — would jeopardize national security.”

Wyden said that was a “very, very damaging position to stake out,” adding he would continue to “battle it out” with the intelligence community for an answer.

Coats countered that he pledged to “make every effort to try to find out why we were not able to come to a specific number on the collection of U.S. persons,” and that he personally visited NSA and met with Director Mike Rogers to get the answer.

“They went through the technical details,” Coats explained. “There were extensive efforts on the part of NSA to try to get you an appropriate answer. We were not able to do that.”

Coats said that in his conversation with Rogers, the NSA director stated “if someone out there knows how to get to it, he’s welcome to have them come out and tell NSA how to do it.”

Coats added the technical complications of coming up with a number would be explained to senators in a closed session later Wednesday.

Rogers, during his testimony, said Section 702’s collection and value grows every year, and that it was 702 authority that allowed the signals intelligence agency to intercept intelligence on Russian efforts to interfere with the 2016 presidential election.

But Maine Independent Sen. Angus King noted there’s a difference between the collection of data and the querying of that data once it’s stored in an NSA database

Former NSA contractor Edward Snowden, who leaked the existence of widespread upstream surveillance programs like PRISM, noted the same difference during a March interview, during which he disputed intel chiefs’ description of how Section 702 is used and subsequently abused to spy on Americans.

“The main thing that this boils down to are word games,” Snowden said on an Intercept podcast. “These intelligence agencies…they’re saying to them, collect doesn’t mean that we copied your communications, that we put it in the bucket, that we saved it in case we want to look at it.” Those things, he added, are happening to virtually everyone.

“To them, collect means that they take it out of the bucket, and actually look at it and read it,” Snowden said.

In theory, surveilling an American requires a warrant. But according to the former NSA contractor, the agency can circumvent that.

“They can’t target you directly, but if they look at the other side of that communication — the communication that went overseas or involved a non-U.S. person in any way — that’s entirely legal,” he said.

In the 10 years since Congress enacted the FISA Amendments Act, Coats said “there have been no violations of Section 702,” but Rogers admitted there have been compliance issues.

On Tuesday, Republican Sens. Tom Cotton of Arkansas, Richard Burr of North Carolina, Marco Rubio of Florida, Lindsey Graham of South Carolina, and others introduced a bill to make Section 702 permanent and without expiration.

However Graham went on the record Tuesday saying, “As big a fan as I am of incidental collection, I’m not going to reauthorize a program that could be politically manipulated,” noting Section 702 was the authority used to intercept communications between former National Security Advisor Michael Flynn and the Russian ambassador during last year’s presidential transition.

The Obama administration unmasked Flynn’s name from an intelligence report detailing the interception, which was later leaked to the press.