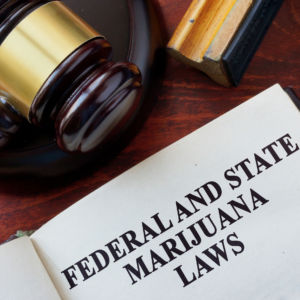 That was the everyday reality for anyone involved in the legal marijuana business — whether medicinal or recreational — because of an ancient federal law (the Controlled Substances Act), which has been used to sic the feds on states that have decrimininalized or outright legalized marijuana.

The hounds — so to speak — took the form of financial fangs in the backside, via threatened prosecution by the Department of Justice of any federally chartered financial institution that dared to business with legal marijuana businesses.

To countermand what the people of these states had decided to approve — because the Feds didn’t approve.

Banks, credit unions and so on weren’t allowed to accept deposits or open accounts, offer loans or transact any business with a business that was involved in the marijuana business — even when the business trying to conduct that business was trying to do so lawfully.

This is hard to do when you’re effectively forced by the Feds to deal in cash because banks won’t cash your checks.

This created a huge incentive to conduct business off the books. To not pay unemployment taxes — and to pay employees in cash. And probably less than they’d make if they were paid aboveboard.

Put another way, the federal law designed to curb illegal activity encouraged it. Ironic — and unjust.

But isn’t either, any longer.

On Thursday, Congress approved an amendment to the 2020 budget legislation sponsored by Oregon Rep. Earl Blumenauer that defunds federal Department of Justice harassment of banks and other financial institutions that open their doors to legal marijuana businesses in the states where they do business.

Which at this point is almost every state in the union.

Eleven states — including Colorado, Maine, Oregon and Washington — have completely decriminalized marijuana. Every other state in the country has legalized pot to some degree — whether medical or recreational.

Even profoundly conservative Utah — along with Missouri — recently (2018 midterms) legalized medical marijuana, probably because it’s medically incontestable that marijuana has unique properties that ameliorate real suffering — including intra-ocular pressure in patients who have glaucoma as well as making the lives of patients afflicted with cancer slightly less awful by restoring their appetite.

And states have grown tired of wasting scarce resources prosecuting what many regard as a relatively harmless vice that could instead be regulated and controlled in a manner that generates revenue for things like schools rather than drains it.

But the federal government — or rather, the federal Justice Department — has been acting as though it’s still 1970, when pot was illegal everywhere and thus it made sense to prohibit financial institutions from knowingly doing business with what were then criminal enterprises.

But it’s not 1970 anymore — and whether the Feds like it or not, the enterprises at issue are now entirely legitimate. Congress just voted to make the DOJ accept that fact.

Bluemenauer has been a key player behind annual efforts aimed at defunding deprivation of DOJ witch hunts. This has earned him the enmity of former Trump attorney general Jeff Sessions, an ardent supporter of the War on Drugs, even though almost every state in the union long ago called for an armistice — at least when it comes to pot.

The new attorney general — Bob Barr — doesn’t seem to be as one-track-minded as his predecessor, but making sure he hasn’t got the means to criminalize what’s legal is as important as it ever was.

It’s a reflection of how much the times have changed. Blumenauer’s amendment was approved so quickly — the vote wasn’t expected until late June — and so convincingly, by a vote of 267 to 165.

Many Republicans voted aye, too — including California Rep. Tom McClintock, whose name was originally attached to the amendment prior to its approval. “The issue at hand,” McClintock told Forbes, “is whether the federal government has the constitutional authority to dictate policy to states on an issue which occurs strictly within their borders.”

The principle of federalism, in other words — as articulated by the 10th Amendment to the Constitution. The idea that the authority ought to be as decentralized as possible and that the people of the states ought to have more say over what’s legal in their state than career federal bureaucrats in far-away Washington, D.C.

As McClinton notes, it’s easy to support federalism when the particular issue is one you happen to approve of. But in that case, you’re not really supporting federalism. You’re just paying lip service to the idea of it because it suits your purpose at the moment.

For Republicans, especially, the vote on the Blumenauer Amendment was an opportunity to show they really mean it.