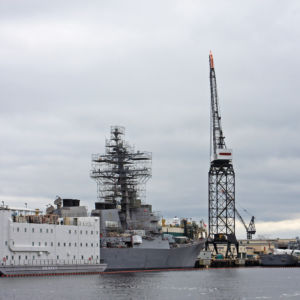 But some congressional Republicans are opposing new Obama administration regulations that would help address these concerns, with one lawmaker calling the rules part of “a radical climate change agenda” that distracts from the fight against “real enemies” like ISIS.

For a while, it looked like there wouldn’t be a battle over the regulations. The GOP-controlled Congress quietly approved a presidential executive order last December mandating federally-funded projects built in a floodplain be constructed to address the risks of stronger flooding.

In addition to affecting military bases, the rules would serve as preventative measures ahead of natural disasters like hurricanes nationwide.

But controversy now seems to be coming from linking these rules to climate change, a phenomenon about which many Republican politicians are either in denial or “skeptical,” often saying the world’s transforming weather patterns aren’t caused by human activity and don’t warrant government action.

That political reality helps explain why the Virginian-Pilot reported last month on the House of Representatives passing a defense spending bill with “amendments forbidding the Pentagon from using federal dollars to study climate change or plan for its impacts.” The bill would limit the military in factoring increased flood risks in construction, including at the numerous bases in the Pilot’s Hampton Roads coverage area that are already flooding regularly.

One of the Republican House members who added an amendment to the defense bill, Colorado Rep. Ken Buck, explained his move in a statement on his website: “When we distract our military with a radical climate change agenda, we detract from their main purpose of defending America from enemies like ISIS. This amendment refocuses the military on our real enemies.”

But the liberal advocacy group Union of Concerned Scientists disagrees. The group issued a report last month finding that rising seas mean “the military is at risk of losing land where vital infrastructure, training and testing grounds, and housing for thousands of its personnel currently exist.”

The study even gave a Virginia example of what damage could be done: Norfork Naval Station, “the largest naval base in the world and home to the U.S. Fleet Forces Command,” is currently flooding 10 times a year, according to the report. But that number could be 280 by 2050.

The study also concluded that inaction could have consequences outside military installations: “Indeed, given the mutual dependencies between installations and surrounding communities, their sea level rise risks are closely intertwined. Unpassable roads in Norfolk and stalled public transportation, for example, can complicate travel to and from Naval Station (NS) Norfolk and compromise operations.”

Some of the hardest hit neighborhoods would be those dominated by military families.

In an interview with InsideSources, American Enterprise Institute visiting fellow Matt Mayer said it might make sense to require higher standards for federal properties on the coast, but the regulation should be done through congressional legislation as opposed to an executive order. He also bristled at a “one-size-fits-all federal mandate” that would apply the same to a naval station as to a hilltop property in Illinois.

“It’s like requiring earthquake codes where we don’t have earthquakes,” Mayer said.

Yet R.J. Lehmann, editor-in-chief of the libertarian R Street Institute, told InsideSources he doesn’t understand Mayer’s concern. “If you’re on a hill at a higher elevation, you won’t have to change anything,” he said.

R Street supports Obama’s executive order, and Lehmann rejected the idea that flood standards for federal buildings should need to go through Congress. Casting the new regulations as cost-saving for taxpayers in the long term, he said, “Something needs to be done, and we prefer that it be done in the most cost-efficient and least burdensome way.”

“Flooding continues to be the deadliest natural disaster in the United States, taking 155 lives last year,” they wrote. “While many Americans may think flooding is only a problem for coastal regions prone to hurricanes and tropical storms, it is far more widespread than that and can devastate any state or region across the country. In just the past five years, all 50 states have experienced flood damage.”

The Senate is set to take up this debate when Congress returns from recess after Labor Day.