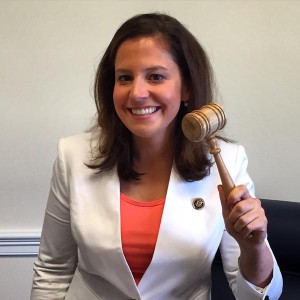 In December of 2013, a pair of writers at the Washington City Paper coined a term for “a growing and curious breed” of political animals that inhabit the nation’s capital: “Ubertarians.”

As defined by reporter Aaron Wiener, Ubertarians are progressive young professionals who support government regulations in principle while opposing many of them in practice. They’re the type of Democrats who value the labor movement but also lament the influence of teachers unions in public education. Like conservatives, they tend to be annoyed by zoning restrictions as well as rules affecting their favorite ride-hailing companies. Under certain circumstances, they’re even willing to “stick it to the knee-jerk liberal, over-regulating D.C. establishment” and vote Republican.

That last point may help explain why Ubertarianism found its way into congressional testimony on Tuesday, at the start of a House hearing on “Millennials and the GOP” chaired by 30-year-old Republican Rep. Elise Stefanik of New York.

As the youngest woman ever elected to Congress, Stefanik has set out to broaden her party’s appeal within her age cohort, which overwhelming backed Barack Obama in the last two presidential elections. And despite young voters recent allegiance to the president, several experts at the congresswoman’s hearing insisted that conservative messages can and do resonate with them. Addressing members of the Republican Policy Committee before a standing-room-only crowd, they argued that “the Facebook generation” doesn’t take kindly to government stifling technological innovation.

“Because of the promising rise of sharing economy services such as Uber and Airbnb — and the hostile response of some legislatures, mostly at the state and local level — only 18 percent of Millennials now view government regulators as having the public’s interest in mind,” said Jared Meyer of the conservative Manhattan Institute.

Meyer made a direct reference to the Ubertarian phenomenon, adding that young people “want companies to be held liable for harming consumers, but they don’t want bureaucrats in Washington dictating how companies need to meet consumers’ needs or get permission to innovate.” According to Meyer, many Millennials hesitate to embrace limited government publicly, partially because they fear being also associated with unpopular social conservatism, such as opposition to gay marriage.

In fact, that opposition — still voiced by every major Republican presidential candidate — could be the GOP’s most obvious short-term problem with young people, according to speakers at the hearing.

Scott Keeter of the non-partisan Pew Research Center said more than 70 percent of Millennials now support “marriage equality,” with many seeing the issue as one with “a tremendous amount of symbolic significance.”

“The polling is overwhelmingly clear and almost unanimous,” added Kristen Soltis Anderson, co-founder of the Republican data analysis firm Echelon Insights. She explained that Millennials often view public policy questions through the prisms of “fairness” and “harm,” and they’ve concluded that gay marriage advances the former without creating the latter. (It’s worth noting that a similar calculation has led young people to a very different place on abortion; they’re divided on the issue and no more pro-choice than previous generations.)

But Millennial attitudes aren’t all bad news for conservatives.

Echoing that sentiment, Anderson said conservatives should fight for the idea that “you can have smaller government with better services.”

Unfortunately for young conservatives, Tuesday’s hearing demonstrated that the GOP remains out of step with most young people on more than just gay marriage. A majority of Millennials support a pathway to citizenship for undocumented immigrants, while Republicans generally oppose that idea. Millennials also favor government action to fight the threat of climate change, which the average GOP leader downplays or dismisses.

These divides won’t be bridged easily. Yet John Della Volpe of the Harvard Institute of Politics reminded Republicans of a reality that might make them feel a bit more at ease: the GOP doesn’t need to win the youth vote to take back the White House in 2016.