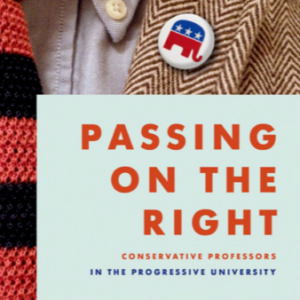 5 Things You Should Know About Conservative College Professors

It’s the first-ever book-length study of conservative academics on America’s overwhelmingly left-leaning campuses, and it’s written by two such scholars — Jon Shields of Claremont McKenna College and Joshua Dunn of the University of Colorado.

They surveyed 153 of their fellow right-of-center professors in the social sciences and humanities, including 84 different schools.

Now their conclusions are being hotly debated in the pages of the Wall Street Journal, National Review, Bloomberg View and other prominent publications.

Hostility toward faculty conservatives is overblown.

“Conservatives fit in the academy much better than conservatives think, [and] better than liberals think too,” Shields said. They may be small in numbers and, in his view, face unfair treatment, but “conservatives survive and even thrive in one of America’s most progressive professions,” as he and Dunn wrote in the Washington Post.

In fact, many right-leaning professors have warm friendships with their counterparts of the left, and some even report arriving at their conservatism after coming to campus.

Tenure is their friend, more than they realize.

Though many conservative professors early in their careers feel obligated to stay “closeted” about their ideology, almost all of them “come out” once their jobs are safe.

“Tenure does have negative consequences,” Shields said. “It does provide a lot of job security, and that sometimes does diminish professors’ incentives to be good teachers and good scholars. … But this book really did sensitize us to the importance of tenure, because in many cases we noticed these conservatives did change their behavior.”

Amid the current campus debates over “social justice” and “political correctness,” liberal professors are at greater risk than conservatives.

“When you look at all the heads that were rolling around the country — the professors who were getting in hot water for saying things some students found offensive — they were almost uniformly liberals,” Shields said. “That actually didn’t surprise me, given that most professors who teach stuff on race, gender and other kinds of controversial topics are in fact liberal. Conservative professors tend to stay out of those sorts of areas, often very self-consciously.”

Some conservatives think ‘Passing on the Right’ paints way too rosy a picture.

The toughest criticism of the book so far has come from Rick Hess, director of education policy studies at the American Enterprise Institute. Writing in the National Review, he slammed Shields and Dunn for “a truly remarkable and disheartening case of Stockholm syndrome,” arguing that the authors downplay discrimination against the right.

“Shields and Dunn have clearly stumbled onto a winning formula . . . for how to succeed in the academy by becoming every progressive professor’s favorite conservative,” Hess wrote. “They will be widely cited by leftist pundits and by academics eager to dismiss concerns about ideological bias.”

For his part, Shields said this response was a surprise.

“I guess we anticipated a little of that, but not quite with the anger with which it was delivered,” he said. “That may have been just with Rick Hess, who’s sort of a temperamental guy.”

Shields and Dunn also rebutted Hess in National Review, writing that “we know that many conservatives have been treated very badly in higher education, and that they have strong feelings about those experiences. But that doesn’t mean those same experiences provide an unclouded window into the soul of the university. … We think that while all conservatives should be concerned about bias in higher education, all conservatives in good standing can also disagree over its magnitude and significance.”

“My guess is that practically everyone we interviewed would have been a Rubio supporter,” Shields said. “The conservatives we interviewed were very alienated from the Republican Party … particularly because they dislike populism, even when it serves conservative ends. So they really dislike the Tea Party, its fiery candidates, its uncompromising posture.”

“In fact, my guess is that a lot of conservative academics will be much happier with Clinton than Obama,” Shields said. “I think on foreign policy they’ll see her as more engaged in the world and less of a radical than [fellow Democratic candidate] Bernie Sanders and even Obama in some ways. I think inside the Democratic Party there’s some sense of that too, that Clinton would be the more conservative candidate.”

…but, essentially all the academics are despairing over GOP front-runner Donald Trump.

“I wouldn’t vote for Trump under any condition,” Shields said. “I mean, I can’t think of a politician in the modern era that I’ve disliked more. Maybe Pat Buchanan, another populist Republican.”

Asked who he planned to vote for between Clinton and Trump, the professor was candid.

“I guess I’m in denial right now,” he said. I’m not even psychologically there, you know? … Intellectually, though, I’m interested in Trump. As a conservative academic, I sometimes think I’m a little closer to Middle America and understand it a little better than my liberal colleagues, but this election has clearly shown that’s just wrong. Like, I don’t understand my own party, I don’t understand what’s going on. … That might even be my next project, actually, trying to make sense of that.”