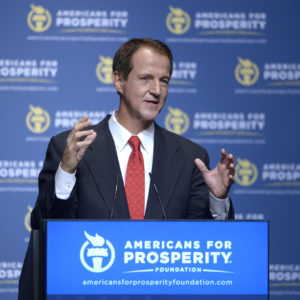 How Conservatives Are Countering the Left’s Grassroots Advantage

“We watched the left, frankly, for decades. They had this infrastructure: government employee unions, private sector unions, the extreme environmental lobby,” explained Tim Phillips, the president of Americans for Prosperity, when we met recently. “Whether we like it or not, they’re credible. They have troops, they have money, professionalism at the local and state level applied over decades. And that’s made them effective.”

Conservatives, Phillips argues, have long been at a disadvantage to the professionally-managed organizing by liberal organizations. According to data from Open Secrets, liberals outspent conservatives in the years prior to the Supreme Court’s Citizens United decision, and that’s closely tied to the left’s grassroots infrastructure.

But while conservatives may officially hold a small financial advantage today, Phillips says the left continues to receive taxpayer funding that doesn’t count as campaign spending.

“And then you’ve also had the taxpayer-funded community groups. Whether ACORN in the old days, when it was blown up because of its own corruption, but now its myriad hundreds of community groups that get taxpayer funding.”

Phillips specifically points to the “community groups that help sign people up for Obamacare. Well, they also happen to do voter registration efforts, and they happen to do voter turnout efforts, as well. The left has a massive infrastructure advantage on the ground. Our side has very little of it.”

Phillips has managed Americans for Prosperity for over a decade. His organization is the key grassroots component of the network of political organizations funded by Charles and David Koch. Phillips describes AFP as the largest ground effort on the conservative side, and it is part of a much larger effort that includes groups like Libre, Concerned Veterans for America, and Generation Opportunity, which all focus on growing support for free-market policies among key demographic groups.

The full Koch network may now have more influence in determining the outcome of elections and legislative agendas than party committees like the Republican National Committee or National Republican Senatorial Committee. The party committees have long failed to implement long term strategies. They air drop staff into swing states a few months before an election, and demographic outreach to grow the party for the future is almost nonexistent.

Phillips says the RNC is judged every November, so it’s difficult to fault it for its operations. “We do not see ourselves as a complement or as a competitor to the Republican National Committee or to local or state parties because the missions are different. Their mission is single-minded: to get every Republican running elected or reelected,” he explains. “Our mission is to move forward an issue agenda and a cultural agenda—to impact the culture of our country to make it more amenable to prosperity and economic freedom and a free society, and also to pass policies that do that.”

Phillips points to an example of AFP’s field team in Florida. They may now be knocking on doors in preparation for helping Sen. Marco Rubio win reelection, but for the previous two years, that same staffer or volunteer would have been knocking on doors to drum up opposition to a potential expansion of Medicaid that had been supported by Republican Gov. Rick Scott. A Republican Party committee wouldn’t ever take such a position against a sitting governor.

AFP will have a significant impact on the 2016 election. The organization has full-time staff in 35 states. Its team of nearly 500 is intended to be in these states permanently—not just for this election. The goal is a long-term presence to not only impact the electoral landscape but also the issue landscape.

And these staffers plus AFP’s volunteer force are able to produce results. They knock on doors every day except Sundays. In 2015, AFP says staff and volunteers knocked on nearly 1 million doors and made well over 11 million phone calls. It took less than four months this year to surpass last year’s totals.

Campaign and party committee staff know how challenging it can be to work with volunteers, who may be dedicated to the cause but aren’t schooled in complex policy issues. But long-term operations at AFP allow the development of volunteers over time. Volunteers come to understand the goals of the organization and learn the policy agenda. AFP’s Grassroots Leadership Academy allows volunteers to not only learn the tactics that drive a quality field operation but also teach principles of conservatism and free markets. This adds to the organization’s effectiveness.

AFP is staying out of the presidential race, as the organization’s backers have indicated they are leery of helping Trump. But AFP will be working to keep Republicans in control of the Senate. Phillips says to watch for heavy volunteer efforts in Wisconsin, Florida, Pennsylvania, Ohio, and Nevada. North Carolina and Indiana are also on the radar.

As pundits claim conservatives will suffer losses this cycle, 2016 is set to serve as a test for an organization with bold ambitions to counter the grassroots advantage of the left.