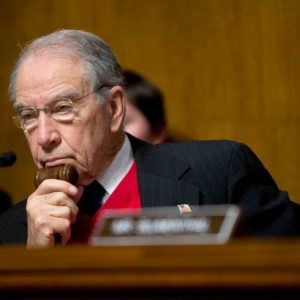 The conservative base—the GOP’s only hope to hold back a #BlueWave in the midterms—has a message for Republican Party leadership:

“If Republicans surrender on the basis of what we know now, they will face the fury of their own voters — and rightly so,” the conservative magazine National Review editorialized late Sunday night.

“The Republicans in the Senate need to put an end to this circus immediately. No more delays. Brett Kavanaugh and his family are getting dragged through the mud, literally, before our eyes. If the Republicans continue to cave to these character assassinations and smears, they will lose their majorities,” Tea Party Patriots Citizens Fund Chairman Jenny Beth Martin said in a statement early Monday morning.

Both were in response to a New Yorker story alleging that Kavanaugh allegedly exposed himself to a Yale classmate, Deborah Ramirez, at a drinking party in 1983.  This response– from both a pro-Trump “tea party” organization and the magazine that famously ran the “Never Trump” cover story in 2016–reveals an unusual level of unity among Republicans in the era of Trump. Republicans would rather fight for Kavanaugh than against each other for a change. And for the moment they’re ignoring questions of whether this fight over alleged sexual misconduct is one they can ever win.

Conservatives aren’t in the mood to talk tactical retreat.

“Senate Republicans must not allow unsubstantiated and discredited allegations from over three decades ago to destroy the life and reputation of a good man,” said Carrie Severino of the conservative Judicial Crisis Network. “Chuck Schumer vowed to oppose Kavanaugh with everything he’s got, and apparently that took the form of character assassination. Senate Republicans should stand up to these unsubstantiated and discredited allegations and move forward with a vote to confirm Kavanaugh.”

“If Senate GOP thinks I’m going to vote for them if they tank a guy on shaky, hole-riddled, unprovable allegations, they’d better look at those midterm numbers again — why vote for a Republican to get nothing out of it?” The Federalist’s Joy Pullman said in a tweet.

In North Dakota, where Democrat Sen. Heidi Heitkamp is in a tight re-election race, the pro-Kavanaugh margin was 25 points— 53-28 percent, and among women 47-30 percent. The poll was conducted by North Star Opinion Research, a GOP polling firm.

President Trump certainly hasn’t shown any willingness to withdraw.  “This claim is denied by all who were said to be present and is wholly inconsistent with what many women and men who knew Judge Kavanaugh at the time in college say,” White House spokeswoman Kerri Kupec said. “The White House stands firmly behind Judge Kavanaugh.”  And the New York Times reports that Trump’s reaction to the latest allegation was that “this is why they should have been fighting the Ford allegations from the beginning.”

As he so often does, President Trump is expressing the sentiments of the GOP base. Many conservatives are frustrated with Sen. Charles Grassley and the Senate GOP leadership for agreeing to delays and accommodations of Dr. Christine Ford—Kavanaugh’s first accuser. These conservatives believe the GOP merely gave Democrats time to find and develop an uncertain and reluctant accuser like Martinez, which is why the GOP should have held their committee vote last Thursday as originally scheduled.

“Democrats are just going to keep trotting out accusers hoping to run out the clock. None will be credible, but they gotta do what they gotta do,” radio talk host and blogger Erick Erickson tweeted when the Martinez story first broke. “At this point, if the Senate GOP doesn’t confirm Kavanaugh, their voters are going to say to hell with them and stay home.”

According to Axios, the GOP strategy this week is to focus on the “foggy memories” of his accusers, highlighting this from the New York Times: ”Ms. Ramirez herself contacted former Yale classmates asking if they recalled the incident and told some of them that she could not be certain Mr. Kavanaugh was the one who exposed himself.”

But even if it works, if Republicans hold together their slim 51-vote senate majority and pick up a couple of Democrats to get Kavanaugh confirmed—would that be a win for the GOP?  Given Trump’s struggles with women voters, some on the Right say “no.”

“The antipathy to Trump from women — college-educated, white, suburban women — transcends anything I’ve ever seen in politics,” GOP consultant Alex Castellanos told the Washington Post.  And the numbers aren’t pretty. President Trump is underwater with women by 19 points, and Democrats have a 12 point advantage among women on the generic ballot question.

Is a high-profile fight that involves challenging the credibility and character of women who claim to be victims of assault a smart political move for the GOP? The problem for Republicans is that if they abandon Kavanaugh now, they may lose support from the base. And in midterms elections, where turnout tends to be lower and base voters make up a higher percentage of the vote, the GOP can’t afford to have demoralized Republicans sitting at home.

“The women who hate Trump and have turned against the Republican Party already hate him,” one GOP consultant told Inside Sources. “There’s nothing Republicans can do between now and the midterms to change that. They just need to make sure the white and rural voters who still support him show up.”

“What we did in the 2016 election is trade fast-growing, well-educated suburban counties for slower-growing, less-well-educated small-town and rural counties,” says Whit Ayers, whose firm conducted the newly-released polling. “That worked for Donald Trump in 2016, by the hair of his chinny chin chin, but it’s not a formula for long-term success.”