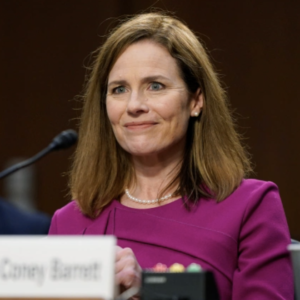 “Today we have reason to celebrate,” Sen. Ted Cruz (R-Texas) told activists and the press following the Senate Judiciary Committee’s opening hearing Monday on the nomination of Amy Coney Barrett to the Supreme Court. “Judge Barrett is very soon going to be confirmed as Justice Barrett.”

Cruz joined fellow Sens. Mike Lee (R-Utah) Josh Hawley (R-Mo.) and conservative groups for a press call to recap the opening day hearing. Their message: The Senate will confirm Barrett, and the Democrats can’t do anything to stop it.

Barrett, a judge on the Seventh Circuit Court of Appeals since 2017, was nominated in September by President Trump to fill the seat vacated by Ruth Bader Ginsburg’s death.

The Democrats “want to make law. They want to make policy through the Judicial branch,” Lee said.

“You see all these jackwagons, these leftist protestors, and they’re chanting things like ‘this is what democracy looks like,'” says Sen. Mike Lee. “I’m convinced they’re doing that just to annoy me.” (Lee made a social media splash by tweeting that America is “not a democracy.” He’s right. America is a democratic republic.)

Lee says that Barrett “accurately and concisely defined the separation of powers that is so important to our Constitutional system of government.”

Democrats, Hawley says, have “not a lot of hope for killing this nomination, because they don’t have anything.”

“She is the natural inheritor of Justice Scalia’s legacy,” said Rep. Mike Johnson (R-La.). “She clerked for him, she studied the Constitution under him, and she’s cut out of exactly the same mold.”

“Amy really is America, and she really represents that,” Johnson added, saying she’s a “generational pick for the Court. She’ll be exactly the kind of jurist the founders intended.”

“Democrats are projecting their fears on to the American people,” Sen. Marsha Blackburn (R-Tenn.) added. “They’re centering this on healthcare. It’s not the ACA they’re worried about.”

“Having a Constitutional jurist would block them from implementing Medicare for All,” says Blackburn.

Sen. Lee reiterated that Democrats kept coming back to healthcare, basing their opening statements on policy positions and suppositions of what Barrett may do as a Justice on the Supreme Court.

“This isn’t the kind of thing people should be lighting themselves on fire about, it’s not that sexy,” Lee says, but that “over and over and over again you saw them refer to posters of cute little kids and suggesting that if you confirm Amy Coney Barrett to the Supreme Court, you’ll be taking healthcare away from little Timmy. You’ll be throwing them to the wolves, and if you do that, you must love Satan and want to torture kittens and puppies while you do that.”

“They’re trying to turn this into a Joe Biden campaign ad, and we can’t let them do that,” he finished.

“I don’t support packing the court, although I have to say I think that’s exactly what [Senate Majority Leader] Mitch McConnell and Donald Trump have done,” Shaheen said. “But no, I don’t think expanding the number of judges on the Supreme Court is a good thing to do.”

Gov. Chris Sununu was one of only four GOP governors that recently refused to sign a letter urging the Senate to confirm Amy Coney Barrett quickly. He joined with Govs. Charlie Baker (R-Mass.), Phil Scott (R-Vt.) and Larry Hogan (R-Md.) in abstaining from the letter.

Americans for Prosperity, a nationwide grassroots organization that has endorsed Sununu’s re-election bid, is much more involved in the confirmation process.

Casey Mattox, Americans for Prosperity’s senior vice president of legal and judicial strategy, says that all 35 state chapters are thoroughly engaged in “working on letting the Senate know that we strongly support her and hope [they] quickly confirm Judge Barrett.”