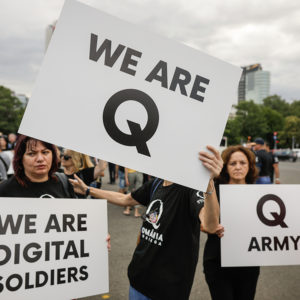 It’s not every day that Americans are charged with sedition, but it may just happen as more evidence emerges regarding the Capitol riots. It’s as though we’ve exited the age of the conspiracy “buff” and entered a new era. Whereas conspiracy believers of the past seemed relatively harmless, these days, their beliefs come with dangerous calls to action — which makes many of us wonder: what can we possibly do about it?

Many people attempt to sway the minds of conspiracy believers with evidence. The idea is that if you show them the facts, they have to see the truth. But this is likely to be ineffective for at least three reasons.

First, conspiratorial thinking may have psychological roots that need to be addressed first. Recent research from Emory University suggests people prone to conspiratorial ideation have low social self-esteem and exhibit signs of narcissism, among other traits. If the espousal of certain beliefs is correlated with specific psychographic attributes, then convincing minds with objective data may not be enough.

Second, underneath all conspiracy theories are coherent ideologies, a master worldview in which conspiracies are normative (rather than unusual). This worldview is so compelling that a believer can espouse two inconsistent conspiracy theories at the same time, as long as each aligns with this underlying ideology. Trying to convince someone to disbelieve a conspiracy may be like asking them to upend the way they see the world – and themselves. That’s too heavy a lift for data alone.

Third, all people resist new evidence that challenges their beliefs to varying degrees. Confirmation bias leads all of us to do online research using keyword searches that are bound to serve up what we want to see. We may dismissively scroll past search results that are misaligned with what we want to hear. Because conspiracy theorists are not alone in employing confirmation bias, asking them to question their belief system is like asking them to override their natural human tendencies. Data isn’t good at doing that.

Changing minds by engaging with individuals won’t work. The most significant hope for curbing the influence of conspiracy theories may just lie in reshaping social networks.

Conspiracy theories spread and thrive when networks of human interaction allow them to. Like COVID-19, a conspiracy theory sitting alone inside a single individual can do little social harm. But if that individual interacts with other individuals – and does so frequently and intensely – beliefs will be transmitted. Social networks involving regular interaction and free-flowing information among like-minded people can consistently reinforce shared beliefs, even when those beliefs are based on bad information.

Add social media to the mix, and you’ve poured on an accelerant. Social media reduces friction in the spread of information. Transmission is immediate, and it’s recorded, so information can be accessed after it was first shared, and there’s no doubt as to what’s been said. Feedback is instantaneous as more people can like or share posts of a conspiratorial nature at once, and then, collective beliefs are reinforced. And the costs of seeking out new engagers is low, given that everyone is right there.

People with power and status can have particular influence. Because of their status online (and off), their messages carry a lot of weight. These individuals are like super-spreaders: just one tweet can reach millions and carry intense sway.

Perhaps we can’t sway the mind of a loved one, but we can be more deliberate about how ideologically diverse our social networks are. Social media companies can choose against rewarding the sharing of misinformation, to prioritize social good over business growth. Government regulators can choose to enforce this. And as individuals, we can fight the urge to pull away from people who disagree with us. Just as frequent social engagement can spread and reinforce misinformation, social distance can encourage an “us versus them” mindset that makes violent action in the name of a conspiracy belief much more likely.

Ideas can be dangerous, but their harm can be curbed with social integration. We got into this mess together. We won’t get out of it alone.

Nika Kabiri, JD PhD is a decision science expert who teaches at the University of Washington and is founder of Kabiri Consulting. She wrote this for InsideSources.com.