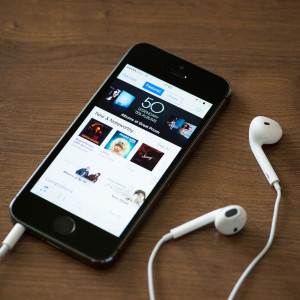 In a Wednesday letter from the non-profit to the Federal Trade Commission and Justice Department, the group urged regulators to “investigate tactics reportedly used by Apple to drive out ‘freemium,'” (or commercially sponsored) and subscription rival streaming services like Spotify, Rdio, Rhapsody, Tidal and Pandora.

“Based on information received by our group, Apple’s new streaming music service raises serious antitrust concerns that require the government to put limitations on Apple as it develops its service if consumers are to continue to have access to free streaming music services and so-called ‘freemium’ music,” Jamie Court, Consumer Watchdog’s president, and John Simpson, its Privacy Project director, wrote in the letter.

“At issue, in fact, is the proprietary information that Apple possesses about its subscribers’ credit cards and musical preferences, which it is leveraging over music labels in an attempt to rub out free (commercial sponsored) music platforms. In this regard, Apple is utilizing its market power in much the way the company did in setting e-book prices.”

Apple landed in hot water while unveiling the service last month, when it offered subscribers three months of free service, during which it planned not to compensate artists, producers and writers for their work. After a wave of backlash from artists led by Taylor Swift, who threatened to withhold her newest album, 1989, from the service during the trial period, Apple changed course and agreed to the standard royalty rate of $0.02 per song.

The FTC has already launched an investigation into Apple’s use of a 30 percent fee it charges rival streaming services like Spotify on its App Store, according to The Verge. The agency began looking into the service ahead of the Apple Music launch earlier this year, when it was reported the Cupertino company was pressuring music labels to force rival streaming services to give up their base free tier of service — a move that would have dramatically reduced competition in the streaming market. Regulators have already begun issuing subpoenas to competing services.

Citing confidential information, Consumer Watchdog told regulators Apple is pressuring music labels for exclusive rights to music by threatening to go directly to artists, and cut labels out entirely if they don’t heed the Silicon Valley giant’s demands. With more than 800 million credit cards worldwide, 40 percent of all online music downloads and a deep dataset on hundreds of millions of users’ musical tastes, Apple is uniquely positioned “to dominate the subscription music sector with whatever price it chooses,” according to the non-profit.

“Given that Apple is both an online platform for music apps, the dominant one in the industry, and now a competitor of streaming music services, Apple is in a position to drive up prices for consumers,” the group wrote.

“While Consumer Watchdog has traditionally had much respect for Apple’s privacy policies, which protect consumers’ private information in a proprietary cloud, the market power and leverage Apple is exerting in the creation of its new streaming music service is very disconcerting and must be stopped.”

This isn’t the first time federal regulators and consumer advocates have investigated Apple for conspiring with the media industry to dominate a digital platform. The company lost an appeals ruling late last month finding the company guilty of colluding with book publishers to raise the price of e-books online.