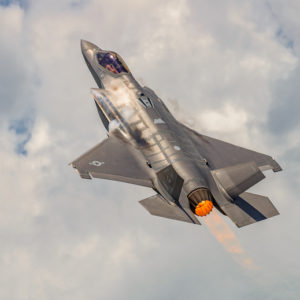 Contractor Is in Trouble With the Pentagon

With contracts in the billions to trillions of dollars range, bidding at the Pentagon can be a tricky, albeit big business. The proposal process is complicated, and competition is thick. A mistake to avoid is importing materials from an adversary when making American military equipment. One American company did just that — importing a critical engine part for fighter jets from China — and the Pentagon isn’t happy.

Reuters reported on September 7 that the “Pentagon has stopped accepting new F-35 jets after it discovered a magnet used in the stealthy fighter’s engine was made with unauthorized material from China, a U.S. official said.”

The F-35 fighter jet has had many problems over the years. Dan Grazier wrote in The Hill in April 2021 that the F-35 program has “a projected cost over $1.7 trillion” and “exhibits everything from structural cracks to cybersecurity vulnerabilities. Twenty years in development — and it still can’t shoot straight and is rarely ready to fly when it is needed.”

It was supposed to be a “low-cost plane intended to serve the needs of all military branches.” Only in Washington could a program costing more than $1 trillion be classified as “low cost.”

The design flaws are numerous in the program, and some of them were never intended to be corrected. Business Insider reported on March 13, 2020, “The beleaguered F-35 Joint Strike Fighter is still suffering from hundreds of unresolved design flaws, according to a new report from a nongovernmental watchdog, dozens of which the Defense Department has ‘no plan’ to ever correct.”

The Project on Government Oversight requested information about the program. It was provided a list of 833 design flaws, with more than half in dispute between the contractor and the government. More than 100 were designated to never be fixed by the contractor.

With the numerous problems slowing this expensive program, now the threat emerges of a Chinese part being used to manufacture the F-35s. There may be issues in replacing that part thanks to the need to find a new domestic supplier of a specialty product. This will cause even more slowdowns in a program that has promised so much and delivered so little.

It seems as obvious as saying water is wet, but U.S. military hardware should be made with American parts. There is a slew of reasons for this, not the least of which is ensuring foreign powers cannot tamper with our military equipment by putting in a defective part or one that could track a stealth aircraft.

This is a big problem because, as Bloomberg News reported on September 9, “every one of the more than 825 F-35 fighter jets delivered so far contain a component made with a Chinese alloy that’s prohibited by both U.S. law and Pentagon regulations, according to the program office that oversees the aircraft.

One would think somebody would have picked up on this before more than 800 aircraft were built and delivered to the military. But this is the federal government, so think again. The more we learn about the program, the more problems we discover.

The concerns are many. What if this part has been put into the program intentionally by the Chinese who want to sabotage the engines with a product designed to fail or for espionage? There’s certainly a motive. The Chinese military doesn’t want to face the F-35s in a potential conflict. That’s for certain.

If taxpayers pay top dollar for a military aircraft, they expect the best America offers. Not a clunker of an aircraft that has violated the law with a banned Chinese engine part.

Lane Koch is a former congressional staffer and a Republican strategist specializing in grassroots voter contact. She wrote this for InsideSources.com.