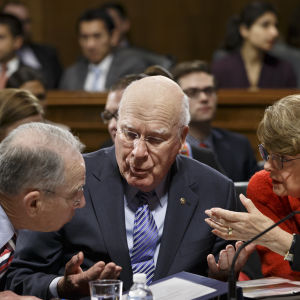 On the last Thursday in November 1990, President George H.W. Bush walked into a White House ceremony, delivered perfunctory remarks to a smattering of dignitaries and then, surrounded by lawmakers, signed the most comprehensive federal immigration reform in six decades.

With an increase to the number of legal immigrants allowed in the United States, the policy was a big bipartisan accomplishment for the Republican, supported by both parties in Congress and sponsored by no less a liberal Democrat than Massachusetts Sen. Ted Kennedy.

A quarter century later, the reform is still bringing Democrats and Republicans together on Capitol Hill — but it’s not for the reasons they’d hoped.

A particular program created by the law is the subject of growing concern on both sides of the political aisle — the EB-5 initiative giving wealthy foreigners visas in exchange for $500,000 investments in American businesses.

This Employment-Based Fifth Preference system was intended to boost the economies of underdeveloped rural enclaves and impoverished urban areas, but mounting evidence suggests it’s rife with fraud. The State Department reports administering about 10,000 “green cards” through the program annually, yet investment often flows to tony downtown development in places like Dallas, New York and Washington, D.C. Meanwhile, fast-tracking of American citizenship for investors and their families has drawn another criticism — that the program is just one more perk for the privileged in an age of economic inequality.

All of this has transformed an initiative that was hardly utilized until the 2008 financial crisis into a political football, and Senate Judiciary Committee Chairman Chuck Grassley is set to hold his latest hearing on the program Wednesday. The Iowa Republican’s proceeding follows a Feb. 2 forum that asked, somewhat breathlessly, whether the government should even be trying to salvage the system as opposed to simply scrapping it altogether. It’s still an open question after a reform bill died during December’s budget negotiations, and the debate is certainly a far cry from the bipartisan backslapping at the White House 26 years ago.

The timeline of troubles with the EB-5 program began after 2008. Recession meant banks stopped extending as much credit to developers, and the Obama administration promoted foreign investment through the initiative as a fix. The result was nearly $2 billion pumped into the U.S. economy each year, 80 percent of which came from China, according to a 2015 report from a pro-EB-5 trade group. “It was a big help in the financial crisis,” said American Immigration Lawyers Association president-elect William Stock, who works with EB-5 clients in his own legal practice.

Boosters of the program also point to the 30,000 jobs it reportedly creates each year, including thousands in the Lone Star State cited by Republican Sen. John Cornyn. “If it weren’t for the job growth we’ve seen in Texas over recent years, the U.S. economy would not be seeing any,” he said at Grassley’s February hearing.

Part of the controversy, though, comes from where exactly those jobs are growing. “Despite clear congressional intent to spur immigrants to invest and create jobs in the areas of greatest need,” Grassley said, “the [Department of Homeland Security] has routinely allowed EB-5 money to be invested in projects in affluent urban areas with low unemployment and little shortage of available financing.”

Furthermore, a 2015 report from the Government Accountability Office concluded that EB-5 “faced significant challenges in its efforts to detect and mitigate fraud risks.” It even suggested the program’s economic benefits may be overstated.

Added to these worries are a stream of news reports about EB-5 malfeasance and several Securities and Exchange Commission investigations, which Sen. Diane Feinstein, D-Calif., discussed at length. An opponent of the entire EB-5 initiative, the senator spent her time at the dais reviewing half a dozen alleged fraud cases across the country. In one, a Florida businesswoman used investment money to buy a multi-million dollar home, a 48-foot boat, a BMW and a Mercedes, according to the South Florida Business Journal.

Separate and apart from those allegations, Feinstein made the moral case that America shouldn’t be in the business of selling a pathway to citizenship — especially while millions of ordinary people are waiting in line. “The right to immigrate should not be for sale,” she said.

This is a noteworthy bit of intra-party politics, with Feinstein’s position putting her at odds with New York Sen. Chuck Schumer, likely the next leader of the Senate Democrats. He’s part of a bipartisan group backing a new EB-5 reform proposal from Sen. Jeff Flake, R-Ariz., but was quick to defend the program as vital to his low-income constituents in the South Bronx.

“To eliminate it, at a time when we’re desperate to help people stay in the middle class and get to the middle class, makes no sense,” he said. Schumer, Cornyn and Flake have also all received large campaign contributions from developers.

Some EB-5 defenders are even trying to move the goalposts by advocating expansion of the program. Stock, the American Immigration Lawyers Association leader, allowed that there are improvements to be made, but told InsideSources the government should raise its cap of 10,000 visas per year. “The U.S. has put handcuffs on its economy by saying we only want a certain amount of this investment from overseas,” he said. “Let’s take the handcuffs off.”

On the opposite end of the spectrum is David North, a fellow at the Washington-based Center for Immigration Studies. He calls himself a liberal Democrat notwithstanding his restrictionist stance on immigration, and faults President Barack Obama for pushing a program where “the poor are pretty well disregarded.”

North acknowledged to InsideSources that “some carpenters get some jobs in the construction that goes on,” but said the biggest benefit too often goes to “clever American middlemen” taking advantage of the Chinese.