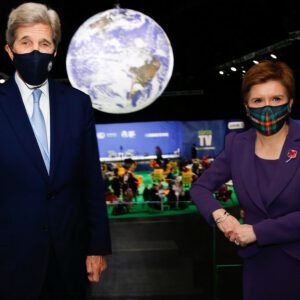 A two-week United Nations gathering on how countries can collaboratively work to fight climate change is wrapping up. Many national representatives met at the climate summit, known as the 26th United Nations Climate Change Conference (COP26), in hope of finalizing new agreements and pledges for global carbon emissions reductions. While working toward a cleaner environment is an important goal, COP conferences in the past have just recycled tired old talking points calling for the abolition of non-renewable fuels, more government involvement in the economy, and a pile-on of anti-consumer regulations. We’d hope for more realistic and cost-efficient strategies, but taxpayers should expect more of the same this year.

President Joe Biden was one of the many foreign leaders who attended. And given his hostile governing approach towards fossil fuels, he felt right at home. From canceling the Keystone XL pipeline to his plan to raise taxes and fees on American energy producers, there is no shortage of harmful energy policies coming out of the Biden administration. Taxpayers should be extremely concerned about the prospect of even more international regulations that will drive energy costs higher for developed nations.

One of the most concerning ideas of imposing top-down regulations to transition to 100 percent clean energy – which would essentially prohibit the use of fossil fuels and combustion engines. Sure, the United States should transition towards cleaner, greener energy sources, but it must be done in a balanced manner that protects jobs, consumers, and businesses. If the free market leads this transition, then this transition will be better off for workers, consumers, and businesses. Yet, forcing the elimination of fossil fuels is not so much weighing the costs and benefits, but instead punishing certain industries they view unfavorably.

Additionally, the private sector is already innovating and leading us toward a “greener” future. Letting the market choose which types of energy should be used is the fairest and most effective way to lower prices and protect jobs.

Instead of more government regulations and mandates, there is a better way to lower electricity prices, expand consumer choice, and contribute to lowering carbon emissions. One of the most innovative energy developments over the past several decades has been the widespread adoption of “competitive wholesale markets.” Under this model, electricity is purchased at market-determined wholesale prices from a variety of different electricity suppliers so customers can get the best energy rates. This is different from the vertically integrated model, where providers are permitted to own all levels of the supply chain: Electricity generation, transmission, local distribution, and billing.

Additionally, in some states, customers are able to choose where their electricity comes from and shop around for the best rate. That means customers can choose whether they want their energy to come from renewable or nonrenewable sources. This model is a much more consumer-focused approach that has significant benefits for consumers and the environment at large. In fact, this innovative model is supported by nine former Federal Energy Regulatory Commissioners, who served in both Democratic and Republican administrations.

The Pacific Research Institute recently published a detailed paper highlighting the environmental benefits of a competitive market structure. According to their paper, “jurisdictions with retail competition are reducing emissions at a faster rate than the monopoly jurisdictions as well. Carbon-dioxide emissions in the competitive jurisdictions declined on average 12.1 percent between 2008 and 2018 (the latest data available) compared to an average decline of 7.3 percent in the monopoly states.”

Those developments are significant because it clearly indicates that we can reduce emissions through strategies that provide more consumer choice and fewer mandates. Further, this market structure can also be beneficial for consumers in the form of lower electricity prices. PRI notes that electricity prices in states with a competitive market have “been generally declining or flat over the last five years (2018 being the exception).”

To cut emissions, governments do not have to impose mandates or more regulations, they simply have to let markets run efficiently and fairly. Competitive energy markets can reduce emissions, promote competition, and even lower prices; let’s hope leaders at COP26 took note.