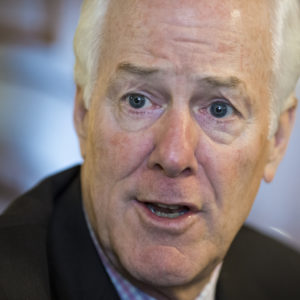 Senate Majority Whip John Cornyn, R-Texas, talks about a criminal justice reform bill during an interview with The Associated Press in his office at the Capitol in Washington, Thursday, Jan.21, 2016. The legislation includes reductions in mandatory minimum sentences for non-violent drug offers, while also increasing minimums for interstate domestic violence. A widening Republican rift over revamping the nations criminal justice system is dashing hopes for overhaul despite strong bipartisan support and a concerted effort by Cornyn. (AP Photo/J. Scott Applewhite)
News

Texas Sen. John Cornyn cited a Dallas County prison program on Monday as evidence that criminal justice reform can transform American lives. But questioned by InsideSources, the Republican Senate Majority Whip also said businesses are worried about proposed policy changes that would increase their legal liability for ex-offenders they hire who end up committing more crimes.

Cornyn’s comments came following a major policy address at the conservative American Enterprise Institute in Washington, where he promoted his Sentencing Reform and Corrections Act. It’s a bill based on Texas criminal justice reforms that, among other things, “seeks to curb recidivism by encouraging lower risk prisoners to participate in job training and other educational programs that have been proven to help them successfully re-enter society and not end up back in prison,” according to the senator’s website.

As an example of these programs, Cornyn praised the nonprofit Texas Hope Literacy for its work with Dallas County inmates. He said he met one woman in particular — someone who struggled with drinking and had “multiple skirmishes with the law” — who claims the group “saved her life.”

“Texas Hope Literacy offers prisoners a comprehensive program that’s more than practical job skills,” the senator said. “It includes courses in alcohol and drug rehabilitation. Many times you’re going to have to help these prisoners deal with their addictions before they can then take advantage of the other opportunities they’re provided. But it also provides counseling for things like anger management.”

Part of the goal of all of this is workforce development. It’s about giving inmates the professional and personal skills to be ready for a job after their sentences are up.

When InsideSources asked Cornyn whether he’d heard from businesses on criminal justice reform in cities like Dallas, the senator said their main concern stems from an idea that’s not in his legislation but has been proposed by other lawmakers. They’re worried about increased legal liability from “banning the box,” or nixing the question about criminal history on job applications, if ex-offenders become re-offenders. According to Cornyn, the fear is that this results in “enhanced or even punitive damages” against employers.

At the same time, the senator said industries like construction are in need of skilled workers, and they may well look to prison training programs as a solution.

“It’s not your typical employer who’s going to be willing to take a bit of a chance on somebody who has a criminal record, and I understand that,” he said. “But we ought to make it easier and not harder for offenders to find work with a willing employer.”

After Cornyn’s speech, one booster of his reform efforts sounded even more positive than the senator about potential advantages for the private sector. “Between [prisons] giving opportunity to outside groups and having wardens institute effective evidence-based programs, it will benefit businesses,” Right on Crime spokesman Joe Luppino-Esposito said in an interview. (Right on Crime is is “a project of the Texas Public Policy Foundation” that bills itself as “the one-stop source for conservative ideas on criminal justice.”)

Luppino-Esposito told InsideSources he’s glad to see a Texan championing reform at the federal level, given that the Lone Star State’s own efforts have led to the lowest state crime rate since 1968.

Cornyn made the same point in his remarks, saying the Texas transition from “tough on crime” to “smart on crime” also saved taxpayers an enormous amount of money.