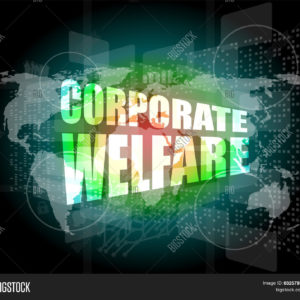 Corporate Welfare: Bipartisanship at Its Worst

It’s a really good time to be a state politician.

With unemployment low and the stock market surging, capitol domes are overflowing with revenue. Surveying all 50 laboratories of democracy, the National Association of State Budget Officers found that the “median rainy day fund balance as a share of general fund spending reached 7.6 percent in fiscal 2019, a new all-time high, rising to an estimated 8.0 percent in fiscal 2020.” Spending increased by 5.8 percent in fiscal 2019 and is “expected to grow 4.8 percent” in fiscal 2020, which for most states ends on June 30th. Barring a sudden downturn, expenditure levels are guaranteed to expand in fiscal 2021.

Prediction: More corporate welfare is on its way.

It’s much easier to hand coddled corporations and insider industries million- and billion-dollar giveaways when taxpayers are working, wages are rising, and 401(k) plans are flush. Both right- and left-wing activists and pundits turn their attention to other matters — e.g., Mexican cartels and “income inequality.”

But as Republican and Democratic pols scramble to out-press-release each other in “economic development,” yet another high-quality research product has made a compelling case against corporate welfare. “Evaluating State and Local Business Tax Incentives,” published by the National Bureau of Economic Research, challenges the political class’s claims about government’s skill at picking winners. Authored by Cailin R. Slattery (Columbia) and Owen M. Zidar (Princeton), the working paper’s conclusions include:

Slattery and Zidar note that the job gains that result from corporations’ sweetheart deals are likely to be neutralized by nearby businesses experiencing “higher wages, local prices, and taxes.” And while landowners in the area might “gain to the extent that … prices increase,” they “may be worse off if their property tax bills increase to finance the incentive.”

The scholars might have added a coda: “Incentivized” investments don’t always deliver even the “direct jobs” promised. Wisconsin is learning that bitter lesson.

So far, not good. The “innovation centers” Foxconn intended to sprinkle throughout the state, Wisconsin Public Radio discovered, are a bust. At the start of the new year, the Milwaukee Journal Sentinel revealed that a “research institute” planned to be “ready for occupancy in January 2020” is nonexistent, and “far less” has been spent at the company’s factory site “than was projected in a November 2017 document that is incorporated into the state contract.”

The bright side of Foxconn’s failures is that by missing key benchmarks, taxpayers benefit. The state’s Legislative Fiscal Bureau estimates that the original payout projection to the tech giant of $212.0 million for 2020 and 2021 is now likelier to be “in the range of $50 million to $75 million.”

But don’t expect Slattery and Zidar’s research, or the Foxconn debacle, to have much impact on red or blue governors and legislators looking for votes … er, seeking to keep their states “competitive.” Earlier this month, New Jersey increased the annual check it writes to Hollywood. (New Mexico did the same, last year.)

Rhode Island’s governor favors a doubling of her state’s “small business loan fund.” (Again.) Grand Junction’s Daily Sentinel reports that “Republican lawmakers in the Colorado House want to improve the state’s Rural Jump Start Tax Credit,” and “Democrats in the Colorado Senate are eyeing a bill to beef up another existing program to help do something similar.”

Neither credible research nor real-world examples motivate state pols to eschew crony “capitalism.” It’s enough to make you root for a recession.