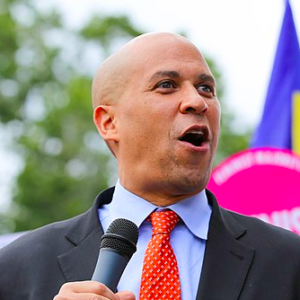 “Nowadays, there is more regulation over toy guns than real ones.”

And with that, Sen. Cory Booker (D-NJ) announced a sweeping series of gun control proposals to address what he calls “the gun violence epidemic.”

In a post on his Medium page, Sen. Booker says, “To make justice a reality for all, we have to end the epidemic of gun violence and invest in communities that have been shattered by the trauma left in its wake. To do that, we need to adopt a plan that introduces aggressive gun safety measures — the most forward-leaning this country has ever seen.”

Among the more “forward-leaning” proposals, Sen. Booker calls for mandatory federal gun licenses for all gun owners, comparing it to requiring a drivers license to drive a car.  The process of getting a gun owner’s license would include an interview with a federal agent. Here’s how Booker describes it:

“Individuals could seek a gun license at a designated local office, widely available in urban and rural areas, similar to applying for or renewing a passport. They would submit fingerprints, provide basic background information, and demonstrate completion of a certified gun safety course.”

“The FBI would then verify submission of required materials and run a comprehensive background check before issuing a federal gun license, after which the license-holder could freely purchase and own firearms. The license would be valid for up to five years before renewal with regular, automatic checks to flag non-compliance with license terms.”

According to Vox.com, the specifics of the licensing process would include a fee, a photo, fingerprints and a one-on-one interview with a federal agent, similar to requirements in states like Massachusetts and New Jersey.

Booker also wants a ban on “assault weapons” and says citizens would have a “reasonable period of time to turn them in” to the government. In subsequent interviews, he confirmed that he supports gun confiscation under the guise of a “mandatory buyback” program.

Sen. Kamala Harris has said she also supports an assault weapons ban and she vowed that, as president, she would use her executive power to impose some gun restrictions.

“Today what we’re seeing is people coming out muscularly for gun safety,” Everytown for Gun Safety president John Feinblatt told the NYTimes. “We’re early on in the 2020 cycle, and I think you’re going to see more and more of this.”

“Just when you think the 2020 field could not get any more ‘out there,’ Cory Booker comes in with a plan to use executive action filled with new restrictions and permits on law-abiding gun owners,” the Republican National Committee’s Mandi Merritt told InsideSources in a statement. “Votes across the country will see this as another big-government grab on our constitutional rights.”

“All this proposal proves is that Sen. Booker doesn’t know very much about guns, gun laws, and their impact,” said gun crime expert John R. Lott. Lott is president of the Crime Prevention Research Center, a pro-Second Amendment organization, and he told InsideSources that Booker’s licensing proposal is “a joke.”

In addition to the constitutional questions raised by Booker’s plan, Lott argues that the enforcement costs of federal interviews, gun tracking, etc. would be exorbitant and far outweigh any potential benefits. “If you spent the same time and money on police work directed at criminals, you’d save more lives.”

“You’d think Sen. Booker would at least have some passing familiarity with the laws in his own state,” Lott says.

Traditional Democrats worried that advocating gun confiscation and federal licenses might drive away moderate voters aren’t part of the current political calculation. As Igor Volsky, anti-gun activist and author of the book Guns Down: How to Defeat the NRA and Build a Safer Future with Fewer Guns told Vox, “We need to ask for what we really want, not what we think moderate, centrist voters would go for. In the book, I argue that should be a future with fewer guns.”