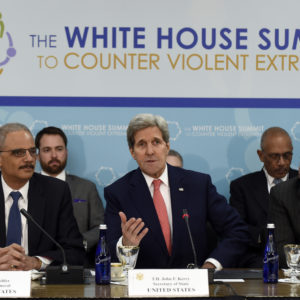 In the vast scope of the federal government, the FBI’s Countering Violent Extremism (CVE) program, is tiny. Begun by the Obama administration in 2015, it had a starting budget of $20 million and began in only three cities: Minneapolis, Los Angeles, and Boston. Despite this, the Countering Violent Extremism programs have been the center of high levels of controversy, with opponents claiming that they violate civil rights, marginalize immigrant communities, and are ineffective at preventing future radicalization.

“Intervention programs like CVE are based on the theory that there are steps individuals pass through along a pathway to terrorism and you can identify these steps and intervene in order to prevent radicalization,” says Faiza Patel, co-director of the Brennan Center’s Liberty and National Security Program. “The problem with this premise is that it’s not true.”

In the aftermath of a terrorist attack, it is possible to trace the steps that led to one person’s actions. However, taking these pathways and trying to make them predictive has proven next to impossible. Although issues like economic hardship and perceived social isolation often impact the decision to turn to terrorism, the vast majority of impoverished individuals are not terrorists.

“We are a long ways from being able to develop a pathway to violence, and even if we had one it would be almost impossible to use that without misidentifying people,” says Heidi Ellis, director of the Boston Children’s Hospital Center for Refugee Trauma and Resilience and a clinical psychologist.

What worries Patel, and other community figures, is that the Countering Violent Extremism program uses broad language to cover an approach that singles out minority populations for additional law enforcement scrutiny even before a crime has been committed.

“You have basically these programs of different kinds that are going into communities, that as far as we know have no links to criminalities,” Patel stresses. “They are going into these communities and saying, ‘Here are ten signs that maybe your son is becoming a terrorist.’ Imagine if the FBI was going out into churches in rural areas and was saying, ‘Be careful, these are ten signs that your son might be turning into a neo-Nazi.’ It’s unthinkable and that demonstrates some of the fundamental problems of CVE.”

Both psychologists and community leaders argue that the program stigmatizes American Muslims, subjecting them to additional scrutiny solely for their religious beliefs. Because law enforcement lacks any effective means of predicting who will or will not commit terrorist acts, the solution so far has been to subject a broad swath of the population to increasingly invasive policing approaches.

She described how Somali communities are deeply affected by even distant connections to terror. In her own work in Boston, she encountered Somali 7th graders who were concerned about increased bullying after Somali youth in Minneapolis joined the North African terrorist group Al-Shabaab. What she found more productive than the FBI’s Countering Violent Extremism program was an approach that focused on building community bonds, helping to prevent violence through connection, engagement, and genuine partnerships between social services and various groups.

From a psychologist’s perspective, the Countering Violent Extremism program is ethically concerning. Last year, the FBI posed adding “Shared Responsibility Committees” to its CVE toolkit. These committes could include mental health professionals who would have been obligated to report on their patients to the FBI. This program was merely another facet of a counter-terrorism approach that focuses on gathering a disconcertingly large quantity of information on a specific subsection of the American population.

As applied in Boston, the CVE approach to countering terrorism blurs the line between actions and beliefs and marginalizes views that some governments find threatening, said Sue Udry, the executive director of Defending Rights and Dissent, a grassroots group fighting the approach in Maryland. She says that the Countering Violent Extremism approach operates as a social engineering campaign that squelches dissent and categorizes religious practice as pre-criminal.

Udry finds it particularly concerning that the program lists views it considers to be beyond the mainstream. On one FBI website aimed at preventing high schoolers from becoming radicalized, the FBI warns that “there are different beliefs that cause people to commit acts of violence” and lists among these environmentalism, anti-abortion views, anarchists, militia, sovereign citizen moments, and animal rights activists.

In many CVE programs, a young person seen exposing some of these “problematic” beliefs is targeted by social service providers. For skeptics of the program, these providers seem suspiciously close to brainwashers. What is even more concerning for people like Udry is that even before being targeted for such intervention, police frequently accumulate large quantities of sensitive information about an individual. She describes how in Los Angeles’ “RENEW” program, the FBI will do a full workup including travel history, social media, any weapons permits, and other background information on anyone merely suspected of radical leanings.

“This mixes up a toxic brew of way too much information about an individual who has done nothing wrong,” she said.

As these approaches become more widespread, they are having negative effects on Muslim communities. Although not discussed as such, part of the CVE program attempts to get mosque-goers to report on each other. This damages group cohesion and also drives the discussion of certain political topics, like American involvement in the Middle East, into hidden venues, says Muqtedar Khan, a professor of political science at the University of Delaware.

“I would have been happier if they had just called it Muslim Watch,” he said, adding that that would have had “greater honesty.” Khan is particularly concerned about the effects this scrutiny can have on young people, who lack outlets to express themselves politically without attracting unwelcome law enforcement attention. He described how his mosque worked to help high school students become involved in the Black Lives Matter movement as a productive direction of advocacy.

“Everyone is looking for an identity and if you get involved in mainstream political discussions, I think that is where they will find their identity, their purpose, their place in life,” he said.

Still, he is concerned that the Countering Violent Extremism program could actually cause violence against Muslims.

“I am afraid that the general rising level of radicalization in our overall political debate May contribute to rising levels of violence in the Muslim community,” he said. The model that the program is based on implicates the Muslim religion, and his community has found that some local residents respond to terrorist attacks by lashing out against Khan and other members of his mosque.

For him, the impact of CVE has not been the money spent, but the ways in which it shifted the discussion of terrorism, providing language that implicated Muslims while seeming to be generic. As a result, he has found that communication between Muslim communities and law enforcement breaks down as soon as some of these terms are used.

Ayaan Dahir, a local activist with the Minneapolis Young Muslim Collective, agrees, citing the programs “debilitating” effects on her community. CVE’s focus on community reporting has created an increase in informants. Whereas before there was a culture where people would reach out to one another, she says that now, Minneapolis’s Somali population is questioning who is watching out on behalf of the government.

“It isolates an already isolated community,” she says. For Dahir, the signs of this isolation are obvious. The FBI has increased scrutiny of the community after several Somali men from Minneapolis traveled to Africa to join Al-Shabaab. She describes this surveillance as tearing the community apart, breaking down the sense of trust that had been previously present. Today, she says that FBI scrutiny even extends to children’s basketball games at a local community center.

This heavy-handed approach is decreasing community trust in law enforcement. Instead of a relationship, the Somali community feels that the police are an oppressive force.

“We aren’t asking for equal opportunity surveillance and entrapment,” she said.

It is hard to prove the success of a program like this. So far, no one has demonstrated that the Countering Violent Extremism programs have prevented young people from radicalizing.

The Countering Violent Extremism program itself looks to be on the chopping block in the FY2018 budget that President Donald Trump has presented, which cuts some $300 million from various DHS programs. This reflects the new administration’s shift from “counting violent extremism” to “terrorism prevention.” At this point, the change may be primarily a matter of semantics, with similar programs continuing under different guises. If so, many of the problems highlighted will remain.