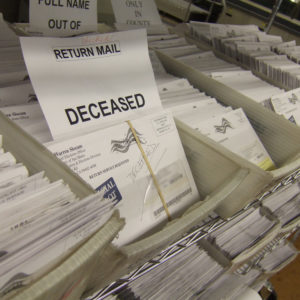 Counterpoint: America Is About to Get a Hard Lesson on Faulty Vote-By-Mail System

Posted to Politics May 11, 2020 by Logan Churchwell

Editor’s Note: For another viewpoint, see Point: Vote-by-Mail Is Essential

Advocates for mandatory mail-in ballot elections often claim they are expanding democracy. What they overlook, is that the mail-voting system has gaping flaws.

In the last decade, 30 million mail ballots were sent to the wrong addresses and/or went missing entirely, according to election officials. That level of failure would not be acceptable from a private business.

The American electorate should not assume that just because it is easy to purchase an expensive item with the reassuring feeling of tracked shipping, the same reliability applies to most counties’ capabilities in handling mail ballots. Amazon and eBay cannot just shrug it off when a package goes unaccounted for. Election officials can.

In 2016, there were two mystery mail ballots for every vote in Hillary Clinton’s margin of victory over Donald Trump in the national popular vote matchup.

This is a field ripe for fraud, and Americans rightfully have serious concerns. A new Emerson College poll found that fewer than half of Americans even trust mail-in voting.

As Emerson found: “Within the coronavirus context and questions of safety with in-person voting in November, voters are not very comfortable changing their method of voting. Voters across the country generally trust their current voting process, with 55 percent trusting primarily in-person voting…”

This should not be a shock, given that the vast majority of American voters have little to no experience using a mail ballot. Academic research suggests that for many, the learning curve is substantial to the point of seeing their votes fail to count.

According to MIT political science professor Charles Stewart III, a disproportionate number of younger and minority voters see their mail ballots rejected when first giving vote-by-mail a try. Unlike being in a polling place where an accident is fixable with the help of a handy poll worker, errors made at home are fatal.

The figures over our contemporary era of elections are dreary in terms of rejected mail ballots. In the historic 2008 general election alone, there were 1 million ballots thrown out. An additional 1.2 million ballots would go on to be rejected in the presidential and midterm contests to date, according to the U.S. Election Assistance Commission.

An increasing reliance on mail balloting forces our election reliability onto a foundation of faulty voter registration records.

In most states, various efforts are made to automate the mail process, such as qualifying for a permanent mailing list. In some states, this is reserved for seniors. Others allow it for anyone who requests it. But when voter rolls fall out of date, ballots bounce, wasting time and resources.

These numbers can seem dizzying and outrageous. But the reason you do not hear about them often is because this faulty system does not currently affect most American voters. Reaching for the mail-in ballot solution in this coronavirus emergency risks a painful, hands-on education as to these longstanding problems.

The United States can take some much-needed lessons from other nations as we weather the pandemic. Earlier in April, South Korea offered a master class in how to hold an election despite coronavirus.

The plan was simple: mask up, wear gloves, check temperatures, maintain distances and vote in person. They even built polling places for COVID-19 patients. Roughly 29 million turned out to vote in a nation with a population of 51 million. Let’s not forget that Liberia managed similar feats despite Ebola.

Proponents of forcefully expanded mail balloting are making ham-fisted attempts at pursuing longstanding election law reforms on the backs of a crisis.

Americans need only look at allies for guidance and remember that the credit card reader at a department store is an equally essential (and therefore cleanable) touch space today as the voting machine in November.

Logan Churchwell is communications and research director for the Public Interest Legal Foundation. He wrote this for InsideSources.com.