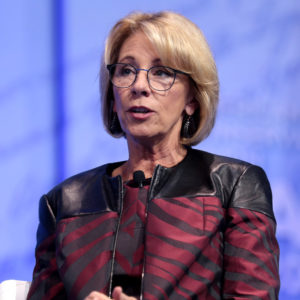 Whenever the results are released, experts converge to suggest poor civics literacy is at the root of all of the country’s issues. Yet despite dips of a few points in scores on history, geography and civics, this year’s results were largely the same as results of tests past. (And, scores aside, researchers have taken aim at the NAEP methodology before.)

But DeVos’ tone makes more sense considering the rest of her press release.

“America’s antiquated approach to education is creating a generation of future leaders who will not have a foundational understanding of what makes this country exceptional,” she said. She called the scores proof of the need to “fundamentally rethink education in America.”

For the billionaire DeVos, that can only mean one thing — funneling public wealth toward pet projects like charter schools.

To be considered proficient in civics by NAEP standards, students must grapple with some key ideas and concepts. As NAEP puts it, they should know how citizens can influence the government, understand the differences between government and civil society, and between American ideals and reality.

A look at the DeVos family’s reach can, on its own, provide a lesson in how these civic principles operate today.

Just days before the NAEP results were released, a group of people in DeVos’ home state of Michigan blocked traffic — including a hospital entrance — to demand Gov. Gretchen Whitmer end stay-at-home orders in a state hit hard by the coronavirus pandemic.

Similar protests have since taken place across the country, even as far more Americans say they are more concerned about businesses opening up too quickly than too slowly.

So here’s a civics question to consider.

More than three-fourths of polled Americans say they think the stay-at-home orders are working, and only a small percent say they’d feel comfortable getting on a plane or going to an event. So why was news of these protests papered all over news networks?

As several outlets reported, the protests are backed by political forces linked to the ultra-wealthy, including Trump allies like Stephen Moore, who admitted to helping organize the protests, and DeVos herself. The Michigan Freedom Fund, which helped publicize the first protest, is headed up Greg McNeilly — a longtime DeVos ally.

These are the people who want to sacrifice the lives of frontline workers in order to “open the economy” — to preserve their own wealth.

The funding from the Michigan Freedom Fund’s associated political action committee comes almost entirely from the DeVos family. The group was heavily involved with a 2012 “right-to-work” campaign in the state, yet another reminder that the DeVos business ethic requires sacrifices to worker health and dignity to further enrich the rich.

To top things off, the protests have attracted some of the most unsavory members of the far right. Several of these billionaire-backed campaigns have featured known white nationalists waving confederate flags.

And while DeVos’ allies help bring white supremacists into the streets, she manages to find other ways to funnel public goods into private hands through her charter school agenda. As journalist Jeff Bryant pointed out in Inequality.org (a publication I co-edit), DeVos has used the pandemic to send millions of dollars toward charter operators.

It’s not like they’re helping students — a recent report found that $1.17 billion in federal funding has gone toward charter schools that either never opened or shut down. Where did the funds go? One operator, which received $72 million in federal funds, spent hundreds of thousands of dollars on luxury travel and tickets to sporting events.

The NAEP asks students to understand the difference between government and civil society. But how does that account for actors like DeVos, or any of the other hundreds of American billionaires who use their wealth to distort politics for their gain?

Civic literacy isn’t the problem. The real issue is billionaires like DeVos who look at the state and see levers of power they can exercise to enrich themselves and their friends, regardless of the cost to the rest of the public.

Negin Owliaei is a researcher and co-editor of Inequality.org at the Institute for Policy Studies. She wrote this for InsideSources.com.