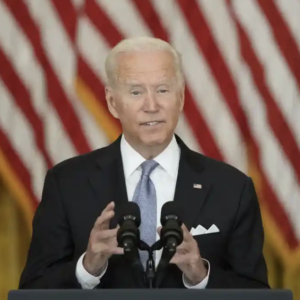 Counterpoint: Biden Is Doing More Than You Think

Editor’s Note: For another viewpoint, see: Point: Biden’s First Year in Oval Office Has Been a Disaster.

At a time of pandemic-driven gloom and relentless Republican-driven doom, President Joe Biden is already a flop.

Heading into the second year of his presidency, Biden is deemed a “failure” in these circles, he and his aides “incompetent.” His approval ratings appear to lend support to these verdicts as they hover under 45 percent — a level his detractors, however, never note is still well above the 35 percent reading of his immediate predecessor after one year, which was by far the lowest in the almost eight-decade history of presidential polling.

Presidential approval ratings, in any event, are fickle. Jimmy Carter’s rating after one year was 8 points higher than that of Ronald Reagan at the same point — 57 to 49 points — yet Reagan was overwhelmingly re-elected while Carter was defeated … by Reagan. President George H.W. Bush stood at 71 percent approval after his first year, only to be ushered from office by Bill Clinton three years later.

Like every other of the 45 previous presidents, Biden made some mistakes in his inaugural year. His withdrawal from Afghanistan was precipitous, though it was tied to Trump’s February 2020 deal promising a full withdrawal within 15 months and based on laughable promises from the Taliban. Presidents Barack Obama, Trump, and Biden all campaigned on leaving Afghanistan, but Obama and Trump failed to follow through after their generals objected. Biden’s opposition to continuing the U.S. 20-year war was longstanding and consistent. In an otherwise close relationship as Obama’s vice president, he wrote a 2009 memo to the then-new president saying the war was unwinnable and later opposed Obama’s decision to surge 30,000 additional troops to Afghanistan.

Yet Biden could have left a small force in Kabul to support the U.S.-backed government and prevent or at least forestall a Taliban takeover. In the name of national security and long-term stability, U.S. military contingents remain in Germany and South Korea decades after the end of devastating wars.

A more careful withdrawal from Afghanistan would have taken advantage of the clear majority of Americans — 60-plus percent when Biden took office — who supported leaving the country.

Biden, never a great communicator, has also sent mixed messages in dealing with shortages stemming from a global pandemic now entering its third year. In an effort to loosen the tangled international supply chain, the president said in October he was weighing the dispatch of National Guard troops to ports in California and elsewhere to help unload clogged container ships, yet he has not done so. More broadly, Biden has pushed sweeping, expensive legislative packages as if he enjoyed the large congressional majorities FDR and Lyndon Johnson exploited. Instead, he has razor-thin margins that make even modest proposals difficult to achieve.

—He signed a $1 trillion infrastructure bill into law in November, providing tens of millions to improve roads, bridges, public transit, broadband access, and other core needs. Trump had campaigned on even bigger infrastructure investment but never overcame Republican opposition.

—The United States rejoined the Paris Accords last February, in line with the two-thirds of Americans who view climate change as a serious problem — and even with the two-fifths of deeply concerned Republicans. Biden’s opponents don’t view this as an accomplishment, but as with so many conservative stances over the years (see their initial opposition to Social Security, Medicare, Obamacare, landmark laws for clean water and air, to name just a few), the public, and history, are not on their side.

—The Senate has confirmed 40 federal judges nominated by Biden, more than any president’s first year since Reagan in 1981. This is the surest sign that Biden isn’t the “radical socialist” Republicans claim as they trot out the tired cliché they’ve used against every Democratic president since FDR.

—Yes, the inflation rate is 7 percent. No one likes paying more for goods, yet that rate is hardly at the “soaring” or “exploding” level Republicans (and too many headline writers) claim. And prices are increasing amid some positive economic signs: the unemployment rate has dropped from 6.3 percent when Biden took office to 3.9 percent — returning to the pre-pandemic levels under Trump in 2018 and 2019. The gross domestic product last year (including fourth-quarter projections) was just shy of 5 percent, the best since 1984. It was less than 1 percent in 2020, Trump’s last year in office. The economy added almost 6 million jobs last year, more than in any previous president’s first year.

—Ninety-nine percent of schools are open compared with 46 percent when Biden took office.

—Biden has reinstated the federal ban on felon executions and ended the Trump-era ban on transgender service members.

In our current hyper-partisan politics, Democrats and Republicans, progressives and conservatives, will differ on whether all these changes are accomplishments and whether the uniformly positive ones are thanks to Biden. Yet it is impossible to look at them as a whole and say, unless you’re following the rote Republican script, that they represent a prematurely failed presidency. Democrats, typically more modest than Republicans, might even use the S-word and start saying it’s pretty darn successful.