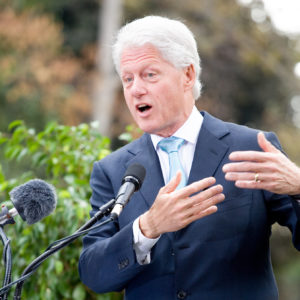 If Hillary Clinton wins the election this November, Bill Clinton would be more than just the first First Gentleman. As a former president himself, he’d get the unique opportunity to do what I’m sure many former presidents wish they could — help right the wrongs of his administration.

This was the massive law that created mandatory minimums for violent offenders before they could be considered for parole, and required those convicted of two or more felonies to serve a life sentence. It incentivized state-level “truth in sentencing” laws, which moved people off parole and into jail cells, and then awarded $10 billion to build prisons.

Bill Clinton didn’t create mass incarceration — we have Nixon’s drug war to thank for that — but he did exacerbate it, contributing to a system where poor, black people are imprisoned longer and more often than anyone else.

We now have the largest prison population on earth, with more than 2 million people incarcerated in the United States today. And more than 60 percent of those imprisoned are people of color, even though they account for just a quarter of the overall population.

Since then, Bill Clinton has acknowledged he made a mistake in signing that law. And Hillary — who notoriously warned back in the 1990s about “super predators” who “need to be brought to heel” — has also acknowledged her mistake and has pledged to “reform our criminal justice system from end to end.”

If Hillary wins, the Clintons will get a chance to do more than just apologize.

The Movement For Black Lives has just released a policy agenda to address racial justice issues in America and put an end to the criminal justice system as we know it. The document provides alternatives, it says, to the current system’s use of “increasingly long sentences as ‘catch-all’ responses to everything from economic desperation to substance dependence.”

At a broader level, the platform calls for ending the criminalization and killing of black people, democratic community control of law enforcement agencies, divesting government funds from prisons, and investing instead in education and other services.

A reformed Bill Clinton could be a powerful advocate for criminal justice reform on these fronts and others. But a new Clinton administration could go even further to make amends with the communities of color most affected by mass incarceration.

For example, the new Black Lives platform also demands reparations for harms from slavery to redlining — a Federal Housing Administration policy that refused to back loans for black people which, in author Ta Nehisi Coates’ words, “destroyed the possibility of investment wherever black people lived.” And it calls for increased local democracy through policies like participatory budgeting.

A Clinton administration that adopted even part of this agenda could help reverse the narrative that they’d pursue the same old policies just because they’re established politicians. And Bill hitting the trail for them would be a fitting extension of the First Spouse tradition of championing worthwhile social causes.

For First Gentleman Bill Clinton, the third time could be the charm.

Domenica Ghanem is the communications coordinator of the Institute for Policy Studies.