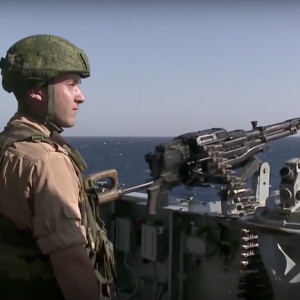 A Russian seaman stands next to a machine gun on the Russian missile cruiser Moskva, near the shore of Syrias province of Latakia, Syria. (Russian Defense Ministry Press Service pool photo via AP)
[IS] Opinions

These atrocities share two things in common: They were perpetrated by the Islamic State, or ISIS. And the victims came from countries whose governments — or in Lebanon’s case, the powerful Hezbollah militia — have mired themselves deeply in Syria’s civil war.

This is no accident. ISIS undoubtedly chose these civilian targets as a way to bring the war in Syria home to the countries that have flung themselves into it. It marks the horrifying globalization of a conflict that has festered in the heart of the Middle East for years.

But there’s a lesson here: Not only has foreign military intervention failed to run ISIS out of its own territory. It has turned innocent civilians far from the war into targets.

As American politicians size up this catastrophe, they are limiting themselves to a debate over how fast and how far Washington should step up its own military role in the war-torn Middle East.

Should we send ground troops, like Hillary Clinton, Jeb Bush and Marco Rubio want? Must we strike with our own “overwhelming air power,” as Ted Cruz says? Or should we make our Muslim allies lead the way, as Bernie Sanders urges?

They’re all missing the point: We can’t bomb our way out of this one.

That’s not to say no one should fight ISIS. The group’s neighbors have been fighting it from the outset. In fact, as terrorism expert Olivier Roy argued in The New York Times recently, they’ve already hemmed ISIS in.

ISIS has ensconced itself in the aggrieved Sunni Arab heartlands of Syria and Iraq, which have suffered tremendously under hostile sectarian governments. But the self-styled caliphate has faced fierce resistance from Iraqi Shiites to the east, the Alawite Syrian regime to the west, Kurds to the north, and fellow Sunni Syrian rebels on several sides.

These forces have prevented ISIS from expanding, but they are unlikely to make a serious effort to dislodge the group from its base. For one thing, many of these groups and their foreign sponsors are also at war with each other — the Turks with the Kurds, the Russian- and Iranian-backed Syrian regime with the Western- and Turkish-backed Syrian rebels, Saudi Arabia with Iran, and so forth.

Moreover, local fighters have their own prerogatives — independence for the Kurds, regime change or survival for the Syrian factions, Shiite dominance for the Iraqis. None of them have much room for the Sunni Arabs languishing under ISIS rule.

The Islamic State, in other words, flourishes in this region precisely because of a sectarian breakdown on both sides of the border between Syria and Iraq. Stepping up the U.S. bombing will only deepen that morass.

Even if ISIS collapses, the absence of a political resolution simply ensures it will be supplanted by some other dangerous force — just as Saddam Hussein’s rule gave way to Iraq’s Sunni insurgents, who in turn gave way to al-Qaida, who gave way to ISIS itself.

Drones can’t fix this. But maybe diplomats can.

International diplomacy may not get ISIS shock troops to the table (though its elite ranks of Saddam-era military officers may be amenable to forging a deal in Iraq). But an international arms embargo among the countries fueling the Syrian war, an eventual ceasefire between the Syrian regime and rebels, and moves toward political reconciliation in Iraq are comparatively realistic objectives. Especially when the alternative is another round of the nightmare we’ve been seeing in the region for the last decade and a half.

Does it make any difference whether the United States continues down this rabbit hole, or it sends its allies down first?

Instead, let’s exit Wonderland altogether. Even modest progress on the diplomatic front would do more to defuse ISIS than launching another impulsive war.