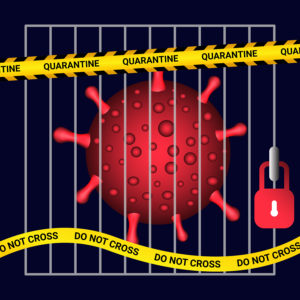 Finding critical supplies, including hand sanitizer and face masks, to protect oneself and loved ones from the novel coronavirus is challenging.

To overcome the shortfall, production of protective gear is now increasingly being sourced by people incarcerated in Florida, New York and other states.

While the supplies are shared with frontline medical and correctional workers, incarcerated individuals’ access to the potentially life-saving equipment has been deprioritized despite their heightened risk of infection from COVID-19 because of overcrowded and unsanitary conditions of confinement.

These decisions reflect a devaluing of the lives of incarcerated people by public officials who have also failed to confront the biggest obstacle to containing the pandemic behind bars: implementation of effective social distancing strategies.

The public is reminded daily at supermarket checkout lines and in public service announcements that the Centers for Disease Control urge maintaining distancing of at least 6 feet from other people. But for those left to sleep in a bunk bed in a tight prison dormitory and share a bathroom with dozens of others, following this recommendation is nearly impossible.

These living conditions have led experts in public health and correctional medicine to urge a reduction in levels of incarceration and crowding to limit the spread of infection in confinement.

While some jurisdictions have transferred hundreds of people to home confinement or released people from jail awaiting trial, far too few releases have occurred to slow serious illness and death behind bars.

The federal Bureau of Prisons, which has a population of 174,000 and has been operating overcrowded prisons for decades, is a stark case in point. To end overcrowding systemwide, thereby allowing increased opportunities for social distancing, at least 11,000 people must be released from federal facilities.

Since March 26, when Attorney General William Barr issued his first directive to prison officials on expediting home transfers, only 1,022 people have been transferred to home confinement. As of April 14, 692 correctional officers and prisoners have tested positive for coronavirus and 15 people have died in federal prisons.

Congress granted the Department of Justice new authority in legislation it approved in March to help reduce the federal prison population by expediting transfers to home confinement.

The attorney general severely limited the effect of this new authority, however, by creating a long list of eligibility criteria, including that individuals must be at least 60-years-old, not have been convicted of a violent offense and reside in a low- or minimum-security facility.

As a result, a very narrow class of people have been determined to be qualified for transfers, and even then, few are benefiting.

According to a legal deposition provided by an assistant warden at a federal prison particularly hard hit by COVID-19, only 58 people out of 1,800 housed at the prison complex met initial qualifications for transfer out of the facility where six people have already died.

Ultimately, only six people were deemed eligible under the attorney general’s criteria to transition from the virus’ hot zone, which means that social distancing and stopping the spread of infection there will remain impossible.

The attorney general’s limited strategy to reduce crowding ignores research that finds older people in prison have very low rates of recidivism upon release regardless of their offense type or history of violent behavior.

Known as “aging out of crime,” the phenomenon has been long established and should be considered in decisions to determine whether or not an individual presents a threat to public safety and is suitable for release.

U.S. District Judge M. Casey Rodgers applied this evidence in granting a petition for compassionate release for Andre Williams, 78, who was serving a life sentence for bank robbery and weapons possession. The order stated:

“Given Williams’ age, serious health problems, the substantial amount of time he has already served, and his exemplary prison record… the court finds that the risk of him engaging in further criminal conduct is minimal.”

Protecting Williams and the lives of both incarcerated people and corrections staff should be a priority for all of us. With 2.2 million people incarcerated in the United States, the potential consequence of failing to take swift action to reduce the spread of infection is staggering.

By releasing people to end overcrowding in prisons and jails, and by providing basic cleaning and protective equipment, officials can make vital inroads to saving lives.