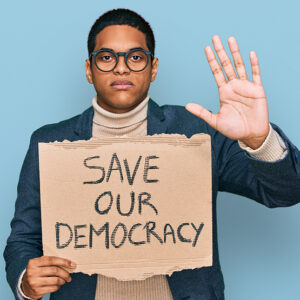 Counterpoint: If We Don’t Expand Our Democracy Now, We’ll Lose It

Editor’s Note: For an alternative viewpoint, please see Point: If You Know Mr. Madison’s Constitution, You’ll Want to Preserve It.

Thomas Jefferson wrote that “government is the strongest of which every man feels himself a part.”

It’s a noble idea, calling back to the Constitution’s dedication to “We, the people.” Few Americans today are constitutional scholars, but most know at least those words. They sum up the democratic sentiments that many of us cherish.

But the truth is, few today would find anything democratic about the government the Constitution gave us. Slavery was widely practiced. Women couldn’t vote, nor could men who didn’t own property. By one estimate, just 6 percent of the population could vote in 1789.

If we cherish the Constitution as a democratic document today, it’s because of its hard-won amendments — protecting freedom of speech and press, ending slavery and enfranchising African Americans after the Civil War, allowing women to vote a century ago — along with expansions of voting rights, like during the civil rights era of the 1960s.

Ours is a long history of movements struggling to make government actually resemble the democracy proclaimed in our founding documents. We’ve achieved so much, but these shortcomings also produced unspeakable suffering — from slavery to the Civil War to long years of violence and segregation.

The Electoral College system, which elects presidents by a convoluted process favoring smaller, more conservative states, allowed both Donald Trump and George W. Bush to win the White House despite losing the popular vote. The consequences include everything from the Iraq War under Bush to the disastrous U.S. response to the COVID-19 pandemic under Trump.

It’s increasingly difficult for voters to repudiate leaders for failures like these. Despite losing the popular vote by nearly 7 million in 2020 — more than twice his popular vote defeat in 2016 — President Trump came within just 40,000 votes in three states of being re-elected by the Electoral College.

The same system badly warps the Senate. Republican senators haven’t represented more Americans or won more votes than Democrats in well over two decades, yet they’ve controlled the body for most of that time.

During the worst of the pandemic, the GOP-led Senate repeatedly refused more generous relief measures that might have eased pandemic suffering. Over the years they also shot down immensely popular legislation on gun control, immigration reform, and environmental protection.

Even now, in a 50-50 Senate, Democrats are extremely constrained by the fact that Republicans representing 40 million fewer Americans can outvote them.

Ominously, these same systems are enabling the worst attacks on voting rights since Jim Crow. According to the Brennan Center, as of March Republicans had introduced an astounding 253 bills in 43 states to restrict voting rights and limit democracy.

These bills do everything from eliminating mail-in voting to letting lawmakers override popular vote decisions — interventions that could be decisive in the Electoral College and Senate, which already require Democrats to win overwhelming majorities just to eke out victories.

Combined with a fresh round of Republican gerrymandering in the House — drawing voting districts designed to minimize representation from the opposite party — Republicans could easily block the Biden administration’s agenda and then win the House, Senate, and White House with a minority of votes.

And it could become nearly impossible to dislodge them from power.

This is not a government of “We, the people.” So it’s time to amend the Constitution again — to replace the Electoral College with a national popular vote, make our Senate more small “d” democratic, end the use of partisan gerrymandering, and protect the right to vote.

But amendments are unlikely since they’d require votes from the same politicians now gaming the system.

Another option for Democrats would be to simply end the Senate filibuster, pass the For the People Act to protect voting rights and end gerrymandering, and admit new states to the union — like the District of Columbia and Puerto Rico — which could partly rebalance the Senate and Electoral College while enfranchising millions of American citizens.

Whatever the approach, if we don’t expand our democracy now, we might lose it for generations to come.

James Madison, the lead drafter of the Constitution, once warned that “silent encroachments by those in power” were the biggest threat to freedom. If we want to protect our democracy, we can’t be silent about those threats — including those buried in that very Constitution.