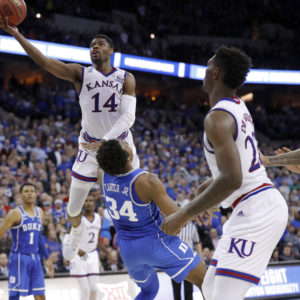 Kansas' Malik Newman (14) is fouled on his way to the basket by Duke's Wendell Carter Jr (34) during overtime of a regional final game in the NCAA men's college basketball tournament Sunday, March 25, 2018, in Omaha, Neb. (AP Photo/Charlie Neibergall)
[IS] Opinions

Counterpoint: Paying Salaries to College Athletes Is a Bad Idea

As March Madness comes to a close, once again we hear that college student athletes are being unfairly “exploited” by being denied salaries for playing sports. Should the NCAA and universities be pressured or forced to change its longstanding policy?

This notion, while seemingly sensible at first glance, is badly misguided. If colleges were required to pay athletes salaries, the entire fabric of amateur college sports could unravel, harming the interests of fans, colleges and — most important — players themselves. Let’s see why.

The National Collegiate Athletics Association is a nonprofit organization that regulates student athletes and organizes the athletic programs of its member colleges and universities in the United States and Canada. The NCAA also “helps over 480,000 college student athletes who compete annually in college sports.”

In its 1984 NCAA v. Board of Regents decision, the Supreme Court ruled that “artificial limits” on the quantity of televised football games imposed by the NCAA reduced competition and violated antitrust laws. But at the same time, the court emphasized that certain other NCAA restrictions on athletes — including salary bans — were key to the preservation of the college football “product”:

“In order to preserve the character and quality of the (NCAA) ‘product,’ athletes must not be paid, must be required to attend class, and the like. … Thus, the NCAA plays a vital role in enabling college football to preserve its character, and as a result enables a product to be marketed which might otherwise be unavailable.”

The court believed that loss of amateur status will cause a popular alternative to big-time pro sports to lose its luster. But there are lots of other bad things that will happen if the NCAA drops restrictions on paying salaries to athletes.

Eliminating “no salary” rules will favor large, well-funded athletic programs over others, likely undermining already tenuous competitive balance among schools. Think of an NCAA March Madness tournament where an even-higher percentage of elite players have been snapped up by big-name schools, and “Cinderella stories” all but disappear.

It will also incentivize the shifting of large college athletic departments’ funds to bidding for big-name high school basketball and football superstars, whose presence will attract future lucrative contributor donations, endorsements and television deals. In addition to reducing team cohesion between stars and other players, this could eventually transform college football and basketball into little more than ugly minor leagues for their pro counterparts.

The tiny proportion of superstars who would receive a year or two of high salaries will gain relatively little, because they are destined for far larger professional contracts in the very near future. Meanwhile, the vast majority of college athletes — who never go pro — will end up losing.

The biggest losers will be the myriad scholarship athletes — young men and women alike — who compete in non-revenue producing sports such as swimming, wrestling, gymnastics, volleyball, and track and field, just to name a few. These athletes cannot realistically expect significant salaries.

Even worse, they can expect reduced funding and fewer scholarships due to the increased focus on paying big-revenue sports superstars. As such, a key quality of their college experience will be diminished as amateurism is swept aside.

Sticking with the existing NCAA rules would allow many more promising but non-superstar athletes in revenue-generating sports to develop their skills over time without pressure, enhancing their ability for some to eventually compete at the professional level.

In addition, the current rules climate already allows for many student athletes to receive endorsements, and even those who do not can develop personal connections that serve them well in their professional and personal lives, including connections derived from the university’s popularity. (Think of wealthy and well-connected alumni who are huge fans of their colleges’ athletic programs.)

Finally, it’s not clear that college athletes, who are compensated with scholarships and living expenses, are materially “underpaid” and are “exploited.” One major economic study of NCAA rules by economists Richard McKenzie and Dwight Lee, for example, rejected this idea.

Alden Abbott is the former general counsel of the Federal Trade Commission. He wrote this for InsideSources.com.