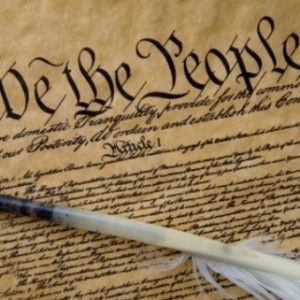 Counterpoint: Protecting Our Freedoms Through the For the People Act

She is right. That’s why on this Fourth of July, it’s time that we, as Americans, hold ourselves up to the values we claim in our founding documents: that all people are created equal and that “We the People” are responsible for building a more perfect union, based on justice, tranquility and liberty. It’s time we build an inclusive democracy, where everyone has a voice, can exercise their freedom to vote, and is able to participate in our democracy.

Even as I quote our founding documents, it is not lost on me that many people were specifically left out of those texts, as America was, in large part, founded on a white supremacist ideology that saw the near extermination of Native people and enslavement of African people. As hard as some may try to stop us, we can’t hide from our past. We must embrace it, learn from it, and dedicate ourselves to changing course and trying to right the wrongs of our ancestors.

In order to do that, we must work toward building a democracy that works for everyone. This is one of the common American ideals that our Founding Fathers actually got right: they let us — the people — set the rules and decide who gets to make them. For far too long, too many Americans, particularly Black and Brown people and young people, have been left out and had their voices silenced.

Enough is enough. It’s past time that we take bold action to ensure every American can enjoy the freedoms, rights, and liberties that are supposed to be guaranteed to us in this country. That starts with protecting our freedom to vote and strengthening our democracy.

As politicians and wealthy special interests attempt to silence our voices and restrict the right to vote, Congress is considering a bill that could fundamentally change who has power in our country and protect everyone’s freedom to vote. The For the People Act is the boldest pro-voter, anti-corruption piece of legislation Congress has considered in decades.

The bill would protect voting rights by giving voters more safe and accessible options to cast their ballot and set national standards for how elections should be run. It would also break the grip of big and dark money in our politics with new disclosure rules, end gerrymandering and strengthen ethics laws.

It’s fitting to talk about this piece of legislation as we near the 245th anniversary of the signing of the Declaration of Independence because the For the People Act is, at its core, about freedom. It’s about our freedom to vote and choose the future we want to see for our families and communities; freedom from wealthy special interests corrupting our politics and setting the agenda; freedom from partisan politicians rigging the rules and gerrymandering maps to benefit themselves; freedom to hold those we put in elected office accountable with ironclad ethics laws. To protect these freedoms, the Senate should follow the House’s lead in passing the For the People Act, as well as the John Lewis Voting Rights Advancement Act.

While the For the People Act will set commonsense standards for elections and block current attacks on voting rights, the John Lewis Voting Rights Advancement Act will restore and strengthen the Voting Rights Act of 1965 to help prevent future discriminatory attacks on voting by requiring changes to election laws in jurisdictions with a history of discrimination to be approved by courts or the Justice Department.

Despite some media reports, the For the People Act is very much alive. It passed the U.S. House in 2019 and again in 2021, and all 50 Democratic U.S. senators voted to advance the bill in June. But Senate Republicans filibustered the bill. After that filibuster, Majority Leader Chuck Schumer said that he will “leave no stone unturned” and the Senate will bring voting rights legislation back up for reconsideration.

The path forward will likely include reforms to the Senate’s rules, which have been amended many times before. It’s now our job to push the Senate to do its job and change the Senate’s rules so the For the People Act and other bills can simply get an up or down vote. Nothing, including the filibuster, should prevent Congress from passing legislation to protect all Americans’ right to vote.

As we celebrate this Fourth of July, let’s come together as a nation and demand our members of Congress deliver on the promise of our American ideals to protect our freedom to vote, promote justice and equity in our political system, and strengthen our democracy.