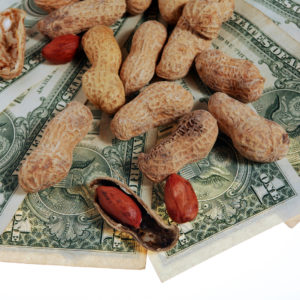 Counterpoint: Raising the Minimum Wage Would Give 41 Million a Raise

Editor’s Note: For an alternative viewpoint, please see: Point: Fight for Fifteen Is a Job Killer

In the eight years since the federal minimum wage was last raised, the buying power of a minimum-wage paycheck has fallen 10 percent due to inflation — and this erosion is not even half of the decline in the value that has taken place since the late 1960s.

Despite a much richer economy and a more educated, more productive workforce, minimum wage workers today are paid roughly 25 percent less per hour than their counterparts almost 50 years ago.

There is no economic justification for this — it is purely the result of policy choices made by Congress of the past half century.

In a recent paper, I examined the effect of the Raise the Wage Act of 2017, a bill that would gradually raise the federal minimum wage to $15 by 2024, the equivalent of $12.50 in today’s dollars.

The proposal would directly lift the wages of 22.5 million workers. On average, these low-wage workers would receive a $3.10 increase in their hourly wage, in today’s dollars. For a directly affected worker who works all year, this equals a $5,100 increase in annual wage income, a raise of 31.3 percent. Meanwhile, an additional 19 million workers earning more than $15 would also see their wages increase from a spillover effect as employers adjusted their pay scales to the increase. A total of 41.5 million workers would benefit from this proposal, which is almost 30 percent of the workforce.

Contrary to common misperceptions about low-wage workers, the people who would benefit from such an increase are not just teenagers working in part-time jobs. Ninety percent of workers who would get a raise if the minimum wage were increased to $15 in 2024 are age 20 or older. The average worker who would be affected is 36 years old, and 70 percent are at least 25 years old. The majority of workers work full time, and more than a quarter have children.

Workers of color and women would disproportionately benefit from raising the minimum wage to $15 by 2024, as 40 percent of black workers and one-third of Hispanic workers would receive an increase in pay. A majority of the workers who would be affected are women (55.6 percent). More than 19 million children — nearly a quarter of all children in the United States — would benefit from an increase in their parents’ pay.

Targeting a national $15 per hour minimum wage by 2024 is a bold proposal, but policymakers must be bold — otherwise they will never overcome the many decades when the minimum wage rose modestly or not at all, and a minimum wage job will never provide workers with a decent income. If we raised it to $15 by 2024, for the first time ever, the minimum wage would no longer be a poverty wage and tens of millions of workers — mostly adults who on average provide more than 60 percent of their family’s income — would have more money to support themselves and spend in their local communities.

David Cooper is senior economic analyst at the Economic Policy Institute in Washington.