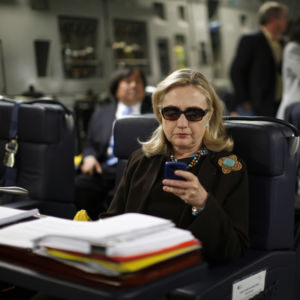 FILE - In this Oct. 18, 2011, file photo, then-Secretary of State Hillary Rodham Clinton checks her Blackberry from a desk inside a C-17 military plane upon her departure from Malta. (AP Photo/Kevin Lamarque, Pool, File)
[IS] Opinions

Counterpoint: Why Obama, Trump Should Reject Calls for Clinton Pardon

In his final days as president, Barack Obama faces perhaps his most difficult decision yet: Should he pardon Hillary Clinton for her alleged misuse of a private e-mail server containing classified information and for her role in the Clinton Foundation, or should he choose to let a Donald Trump-led Justice Department make the call, despite promises from the president-elect he would continue investigations into Clinton’s past?

Either choice presents potential problems for Obama and his legacy. If he were to pardon Clinton, the decision would most assuredly be viewed as politically motivated, partisan and contrary to justice.

A recent McClatchy-Marist Poll conducted just days before the November 8 election shows 83 percent of respondents believed Clinton did “something wrong” while 51 percent said she engaged in illegal activities. According to CNN’s presidential exit poll, which seems to have had a greater proportion of Democratic Party supporters than the election results showed, 63 percent of voters said they were bothered by Clinton’s use of a private e-mail server.

Experts agree that President Obama has the power to pardon Clinton, and it’s true many other lame-duck presidents have made controversial pardons in the past. President Gerald Ford pardoned Richard Nixon. Bill Clinton pardoned Marc Rich, who had been indicted on 65 criminal counts that included trading with Iran during an oil embargo, tax evasion and racketeering. George H.W. Bush pardoned six individuals involved in the Iran-Contra affair.

But something about this pardon is very different; the general perception across the country is justice has not occurred in Clinton’s case. She has continuously promised she did nothing illegal and that her actions were merely “mistakes.” A pardon of her conduct would leave the issue open forever; for the rest of her days she’d be able to tell the world with a straight face the accusations weren’t true, and no one could say a court had ruled otherwise.

In the case of President Nixon, everyone knew he was guilty; he admitted as much. In the case of Marc Rich, most people believed he was guilty, and the evidence overwhelmingly proved it. In the case of Hillary Clinton, however, far more than half the nation believes, at the very least, Clinton did something, but what exactly happened and whether or not it deserves a conviction remains to be determined.

For many, including former Justice Department prosecutors and Republican members of Congress, the evidence against Clinton is overwhelming; but without a conviction, the debate and hostility on both sides will never subside. It’s odd then that so many are calling for Clinton to be pardoned in the name of “healing” the nation. Until we have a determination from a court, there won’t be any healing. Tens of millions of people will feel there is no justice, and, quite literally, they will be right.

Obama knows all this, of course, but he, as any person in his shoes would, must consider the ramifications of a decision not to pardon would have on his party and his own legacy. How would it look if a person who was almost elected president were to be convicted of multiple crimes, or even simply dragged through the mud in a prolonged court case? How would it look for Obama, who campaigned on Clinton’s behalf and testified in the court of public opinion about her trustworthiness? Could the modern Democratic Party survive such a disaster?

Trump has far less to consider. He won the presidency in large part because of his rejection of the established political ruling class in Washington. If he were to pardon Clinton, it would completely undermine the persona he has spent years cultivating and only make the most dedicated of Democrats happy. That does not, however, mean there wouldn’t be any negative consequences for Trump. If Clinton is prosecuted, Trump will face intense scrutiny and vicious attacks from Democrats and many in the media.

A decision not to pardon, if it should result in a prosecution against Clinton, would be a nightmare for Democrats and for Obama, and it could start the Trump administration’s first days off mired in controversy. But at least the American people would learn the full truth, which — and call me old-fashioned — ought to mean something.