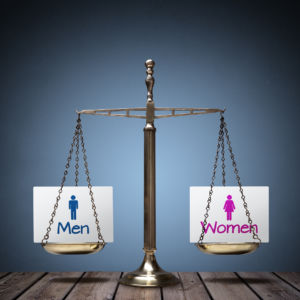 Editor’s Note: For an alternative viewpoint, please see: Point: Pursue Your Own Version of Happiness

My first job as a teenager was running the cash register at a strip mall pizza franchise in suburban Florida. My $5 an hour was essential income for our poor family, even though it required me to learn new survival skills — like fending off aggressive co-workers and handsy patrons.

Turns out I wasn’t alone in that.

Women-led labor organizations report that sexual harassment, wage theft, intimidation and even labor trafficking are distressingly common for low-wage women workers still today. Even when the situation doesn’t rise to the level of outright abuse, the gender pay gap persists across all kinds of professions — from tax preparers to property managers and retail workers.

Two decades after my pizza parlor job, I’m helping to run a nonprofit focused on inequality in America. I’m the second in command at my workplace, so I don’t have to think as often about equal pay or advancement as I used to.

But I wear the scars of how I got here, which began in my childhood watching my mother. She worked long hours as a secretary, plus weekend shifts at a bar just to pay the rent. I’m sure she would have given a kidney for work/life balance, if only she’d had better health insurance.

Some of us do “have it all” at work and home, but only after a lifelong journey encumbered by the burdens of our own bodies. We fine-tune our personalities, our assertiveness and our clothing for male colleagues’ comfort, while shrugging off catcalls at the bus stop and uncomfortable office hugs and being talked over in meetings.

For women of color it’s harder still, even in the business world.

A senior executive I know told me she has to work three times harder than her white, male counterparts just to be respected — let alone paid at the same salary level. She writes long justifications for her programs even when less senior men at her company turn in bullet points, and she struggles to have her ideas heard in meetings.

She’s so exhausted when the weekend finally comes, she can’t enjoy it.

“Women battle all these misgivings about themselves and yet still manage to strive and sometimes thrive,” one of my mentors, Dr. Kathleen Maloy, told me. “But how much energy, creativeness, power and accomplishment gets short-circuited by the constant drain of misogyny?”

In the face of all this, women’s magazines promote glossy visions of breaking that glass ceiling and snagging that promotion and keeping great hair while doing it. At the same time, there’s a backlash brewing, along the lines of “who needs a corner office when you can have flex time and raise your kids?”

Frankly, when you’re on the losing end of the fight for equality, it’s easy to retreat, to try to find joy in what you have and let it alone. It makes perfect sense if you think about what we’re told to value in ourselves as women.

But that’s not going to cut it anymore — not when we’re swearing in a new president who’s boasted about groping women and said little to indicate that equality of any kind is on his agenda.

His top Cabinet picks twist the knife. Among the nominees are a labor secretary who runs fast-food restaurants where yow-thirds of women workers have reported sexual harassment, and a health and human services secretary who’s not only poised to gut healthcare programs but who voted against the reauthorization of the Violence Against Women Act — a 20-year-old law protecting victims of sexual assault and domestic violence.

Starting January 21, hundreds of thousands of women will take to the streets in Washington and their own hometowns to stand up for one another and call the country to action. So now is the moment to channel our energy. We don’t have to settle for the shiny “equality” espoused by career blogs, nor do we have to learn to be happy without it.

What we can aim for instead is true equity.

Equality calls for treating people exactly the same, but equity goes deeper. It accounts for all the burdens we carry from girlhood and our low-wage pizza parlor jobs — and for the multiplying force of racial discrimination, too. Equity includes transgender women, immigrant women and women with disabilities, and all the other identities we hold when we clock in to work.

For working women, this kind of equity would be far more likely to lead to meaningful and long-term happiness than anything we could read in a magazine.

Tiffany Williams, a former social worker and advocate for domestic workers, is the associate director of the Institute for Policy Studies.