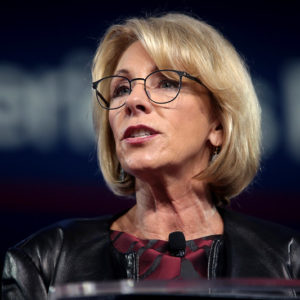 COVID-19 Must Not Delay Enactment of New Title IX Regulations

Posted to Politics April 16, 2020 by Patricia Hamill and Samantha Harris

Sixteen months ago, the Department of Education proposed Title IX regulations that take seriously the rights of both victims and the accused in campus sexual misconduct proceedings.

Since then, the department has reviewed more than 100,000 public comments on those regulations, incorporating feedback from diverse stakeholders.

Despite this opportunity for robust public comment, opponents of these regulations have made clear from day one that they will do everything they can to ensure they are never enacted — including, recently, sending four letters asking the department to defer the rulemaking until after the COVID-19 crisis has passed.

The department must not give in to these opportunistic and disingenuous efforts to thwart regulations that would bring desperately needed balance to campus sexual misconduct adjudications.

Campus sexual misconduct proceedings have been seriously out of balance since the department issued a Title IX “Dear Colleague” letter that transformed the way universities adjudicated sexual misconduct cases.

The letter eviscerated due-process protections for accused students and kicked off an era of aggressive Title IX enforcement that led many universities to hold proceedings rigged against the accused in order to appear serious about combating sexual assault.

As soon as Secretary of Education Betsy DeVos announced in September 2017 that the department was withdrawing the 2011 Dear Colleague letter in favor of a more balanced approach to Title IX rulemaking, supporters of the previous guidance made clear that they would do everything in their power to stop the new rules.

When the department issued interim guidance, the new guidance was immediately challenged in court by a coalition of organizations — including three of the groups now calling on the department to suspend Title IX rulemaking due to COVID-19.

After the department issued its proposed Title IX regulations in November 2018, it opened a notice-and-comment period during which it received an unprecedented number of public comments.

Pennsylvania Attorney General Josh Shapiro immediately threatened legal action to block the rules’ implementation and organized a coalition of state attorneys general who wrote to the department objecting to the regulations.

Many of these attorneys general, Shapiro included, also signed on to one of the letters now citing COVID-19 as the reason the regulations should not go into effect.

In November 2019, the regulations moved to the final step before enactment: review by the White House’s Office of Management and Budget. OMB review is not intended to be a second notice-and-comment period, but rather a final opportunity to raise concerns that may have been overlooked.

Immediately, opponents of the rule — despite already having participated in the notice-and-comment process — began scheduling OMB meetings out as far as possible, in what appears to be another effort to delay adoption of the regulations.

The final two meetings scheduled were by the Women’s Law Project and Equal Rights Advocates, both signatories on one of the COVID-19 letters.

Many of the groups now asking the department to suspend rulemaking are associations of college administrators.

These same administrators have also been publicly touting the need, and their ability, to continue with Title IX adjudications during the crisis by using videoconferencing and other technology.

If administrators can use these technologies to conduct investigations and hearings, they can certainly use the same technologies — not to mention the additional time on their hands — to prepare to make changes to their policies under regulations about which they have known for the past 16 months.

These recent efforts to capitalize on the pandemic should be seen for what they are — the last in a long and consistent line of efforts to ultimately delay the regulations’ adoption until the next election in the hope that they will never take effect.

Accused students have waited long enough for even a modicum of basic fairness. The new rules must be enacted now.

Publication of the regulations does not mean that they must be implemented instantaneously: there is always a grace period for schools to come into compliance, a period that could theoretically be extended, if necessary, in the face of exigent circumstances.

Universities have been on notice of these proposed changes for 16 months now.

If they have failed to plan and are not ready to provide these basic procedural protections, they have only themselves to blame.

Patricia Hamill is chair of the Title IX, Due Process and Campus Discipline practice at Conrad O’Brien, PC in Philadelphia. Samantha Harris is a campus disciplinary attorney at the Foundation for Individual Rights in Education in Philadelphia. They wrote this for InsideSources.com.