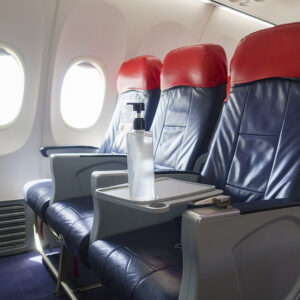 With hospitalizations on the ebb and nearly 47 percent of the country’s population vaccinated, the nation’s airports have begun filling up again as Americans return to the skies. In fact, the July Fourth holiday marked a major milestone – air travel exceeded pre-pandemic levels for the first time.

This vote of confidence in airlines and airports demonstrates that Americans are ready to return to public spaces, even close quarters, so long as there are measures in place that protect public health and safety, like enhanced cleaning protocols.

Case in point: disinfection procedures for aircraft and airports are the number one factor for travelers in their decision to fly again. An Engine Insights study conducted amid the pandemic found that nearly 80 percent of people prioritized routine disinfection and heightened cleaning protocols for aircraft and airports as something that would encourage them to take to the skies.

Fortunately, both airlines and airports worked quickly and diligently at the onset of the pandemic to implement robust, multi-layered strategies to reduce the risk of COVID-19 exposure while traveling – procedures that must be continued as the nation navigates the ongoing threat of highly transmissible variants.

To say that the pandemic changed airline and airport cleaning protocols would be an understatement – it revolutionized them. There has been an evolution in cleaning methods, such as “fogging” entire plane cabins to quickly and effectively disinfect high-touch and hard-to-reach surfaces from tray tables, armrests, and seat belts to vents and lavatories. Airlines also conduct weekly electrostatic cleaning with anti-microbial chemicals.

Experts have even reported that the continued use of these augmented protocols could make flying a safer activity than dining out, grocery shopping or entertaining indoors. The reality is that a person would have to sit next to an infectious passenger for at least 54 hours – much longer than any traditional combination of flights – to receive a dangerous airborne dose of the virus, according to the Department of Defense.

And these cleaning protocols do not just end when passengers exit the plane; rather, they extend to the terminals, restaurants and baggage claim areas. High-touch and highly trafficked areas such as escalators, railings, baggage terminals, security checkpoints and public bathrooms have all been subject to heightened cleaning procedures across the nation. Much like on airplanes, airports have also increased the times their cleaning crews work – sometimes employing two or three shifts per day – and use fogging and spraying when appropriate to clean large areas.

The pandemic has also helped to shape what the airports and airplanes of the future will look like. Restrooms that alert maintenance crews when cleaning is needed and photocatalytic devices based on antibacterial, antiviral and “autocleaning” material may become the norm for travelers in the not-too-distant future.

These enhanced cleaning procedures and protocols have helped keep Americans safe – and feel safe – while traveling during the pandemic. They will be key to assuaging any concerns in the future, especially as the highly contagious Delta variant surges across the United States and other parts of the world.

Getting America back up and flying is everyone’s hope – and maintaining the highest level of cleaning quality is critical to ensuring that people are comfortable returning to the skies.

Josh Feinberg is the President of the Cleaning Coalition of America. He wrote this for InsideSources.